Just bought $500 mln more $AAPL shares. My buying seems to be going neck-and-neck with Apple's buyback program, but hope they win that race.

As Apple opened down nearly 8% following yesterday’s earnings report from the previous quarter, activist investor Carl Icahn announced this morning his third $500 million purchase of Apple stock since the start of the month. Icahn has notably made a lot of noise being vocal toward Apple’s Board of Directors urging a larger buyback program for shareholders, something Apple’s Board has taken a position against, and today’s investment pegs Icahn’s ownership somewhere around $4.1 billion. Icahn’s recent purchases come ahead of Apple’s scheduled shareholder meeting on February 28, 2014.

As mentioned, Icahn already announced a $500 million purchase in Apple landing him at $3 billion just last Wednesday as well as another $500 million purchase the following day. Today’s purchase comes just five days later. With Apple’s market cap around $454 billion, his estimate $4 billion means he virtually has 1% of Apple at this point.

Despite pouring loads of money into the company, Icahn is largely seen as a source of friction for the company. From this WSJ commentary piece:

“I have no respect for Carl Icahn,” said stock analyst Ronnie Moas in an interview. “He needs to start using his power in a different way.”

Apple has already announced a three-year plan to return $100 billion to shareholders through stock buybacks and dividends. If Apple coughed up, say, $10 billion to pay workers, who knows, it might even be able to afford to create jobs in the U.S. Nobody would even notice the money was missing. Except Mr. Icahn. He thinks he deserves it. He’s smarter.

For what it’s worth, Icahn’s announce failed to move Apple’s stock price shortly after his tweet, an effect it’s sometimes had. 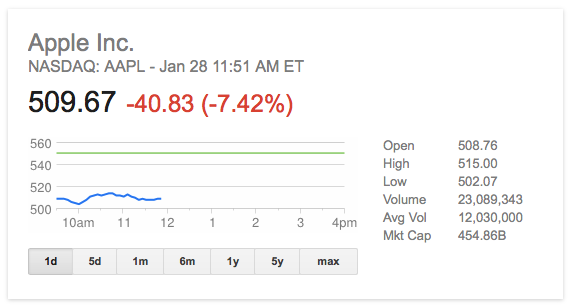 At any rate, we should expect to hear more from the ever-verbal investor ahead of Apple’s late-February shareholder meeting.