Due to her position, Lane was likely instrumental in the iPad’s rapid growth as a product and emergence in society over the past few years, making the departure a significant loss for Apple. However, the company likely has other experienced operations managers who could fill Lane’s role. Her exact successor is unknown…

Apple CEO Tim Cook brought Lane over from Motorola in 2008 ( where she served as Senior Vice President of that company’s supply chain). Lane was previously profiled by Business Insider as a “Tim Cook disciple” and one of Apple’s highest ranking women. Lane was also mentioned in a Fortune article regarding Tim Cook’s impact on Apple. Prior to working at Motorola, Lane was a supply chain executive at IBM. 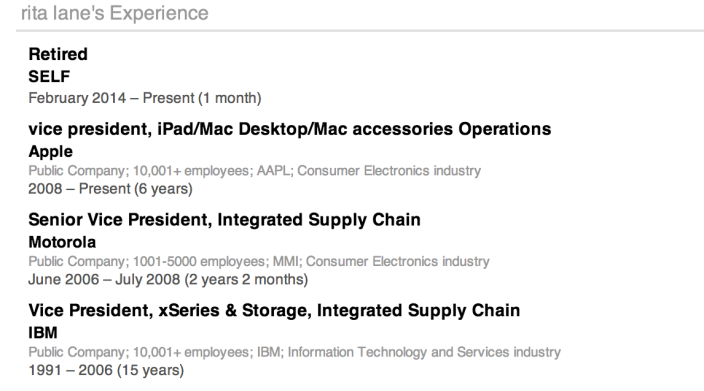 Lane is not the only Apple executive to retire in recent months. Late last year, we reported that Apple’s head of iOS engineering retired from Apple. Apple employee retention has been a popular topic as of late, but it appears that the recent Apple executive departures have been pure cases of retirement, rather than situations in which the high-ranking employees defected to Apple competitors.