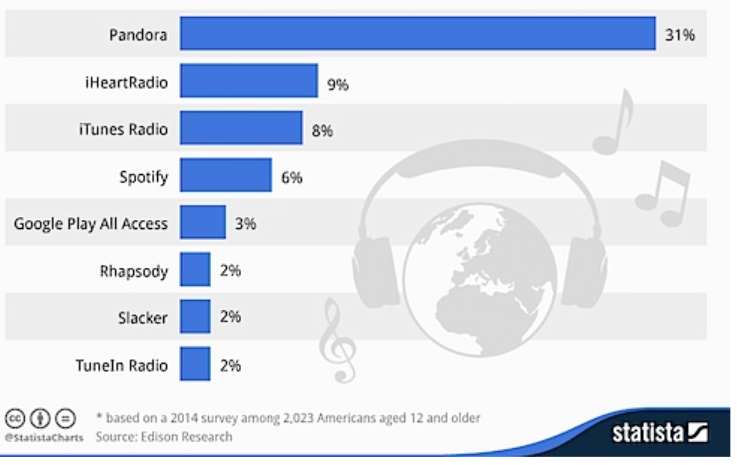 iTunes Radio, launched alongside iOS 7 six months ago, has now overtaken Spotify to become the third most popular music streaming service in America – and looks set to take second place within the next quarter or two.

Reporting on listening data compiled by Edison Research, Electronista estimates that iTunes Radio’s 8 percent market share gives it around 20M listeners, and says that it is the fastest-growing of the top three services …

That figure would suggest that iTunes Radio is growing at the fastest rate of the top three services, and is likely to overtake iHeartRadio in the next quarter or two — particularly if iTunes Radio expands to more countries

Australia was added last month, with Canada, New Zealand and the UK expected to be next in line. There have been sporadic instances of the service appearing in both Canada and the UK, but these are believed to be accidents rather than early roll-out.

While Steve Jobs said back in 2007 that people like to own their music, rejecting a streaming music model at that time, seven years later we look to be moving into an age where streaming is taking over from downloads. Billboard magazine revealed in December that music downloads appeared to have started to decline. It has also been suggested that we’re perhaps listening to less music as apps take more of our time.