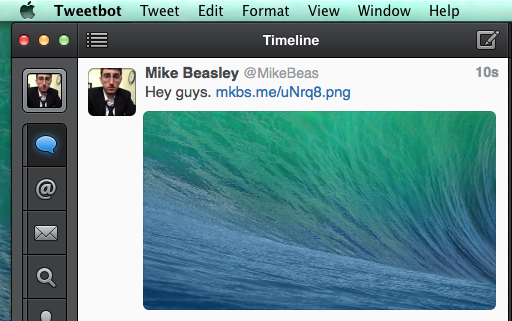 Tweetbot for Mac, the desktop counter to the incredibly popular iOS Twitter client, was updated to version 1.5 today. The new update brings a few bug fixes and a big visual change that was first introduced in the most recent update to the iPhone version. This change brings large image previews to the feed, much like those found in the official Twitter for iPhone app.

For those who don’t like the new look, there’s a setting in the app’s preferences to get the smaller previews back or disable image previews completely. The smaller previews have also been tweaked to be a bit bigger and no longer have a border. Other issues addressed by the update include bugs with context menus, tweet detail layouts, and swipe gestures.

Tweetbot for Mac 1.5 is available on the Mac App Store. It’s a free update for existing users and a $19.99 purchase for new users. The full change log is below:

– Large image thumbnail option (as well as an option for no thumbnail) in the display settings. – Refreshed design of image thumbnails – Three finger left/right swipes in your timeline function if trackpad settings are configured that way. – Fixed the issue where some context menus had the first option highlighted by default – Fixed layout issues when viewing tweet details