Review: Dragon Dictate 4.0 for Mac – The best speech recognition app gets even better 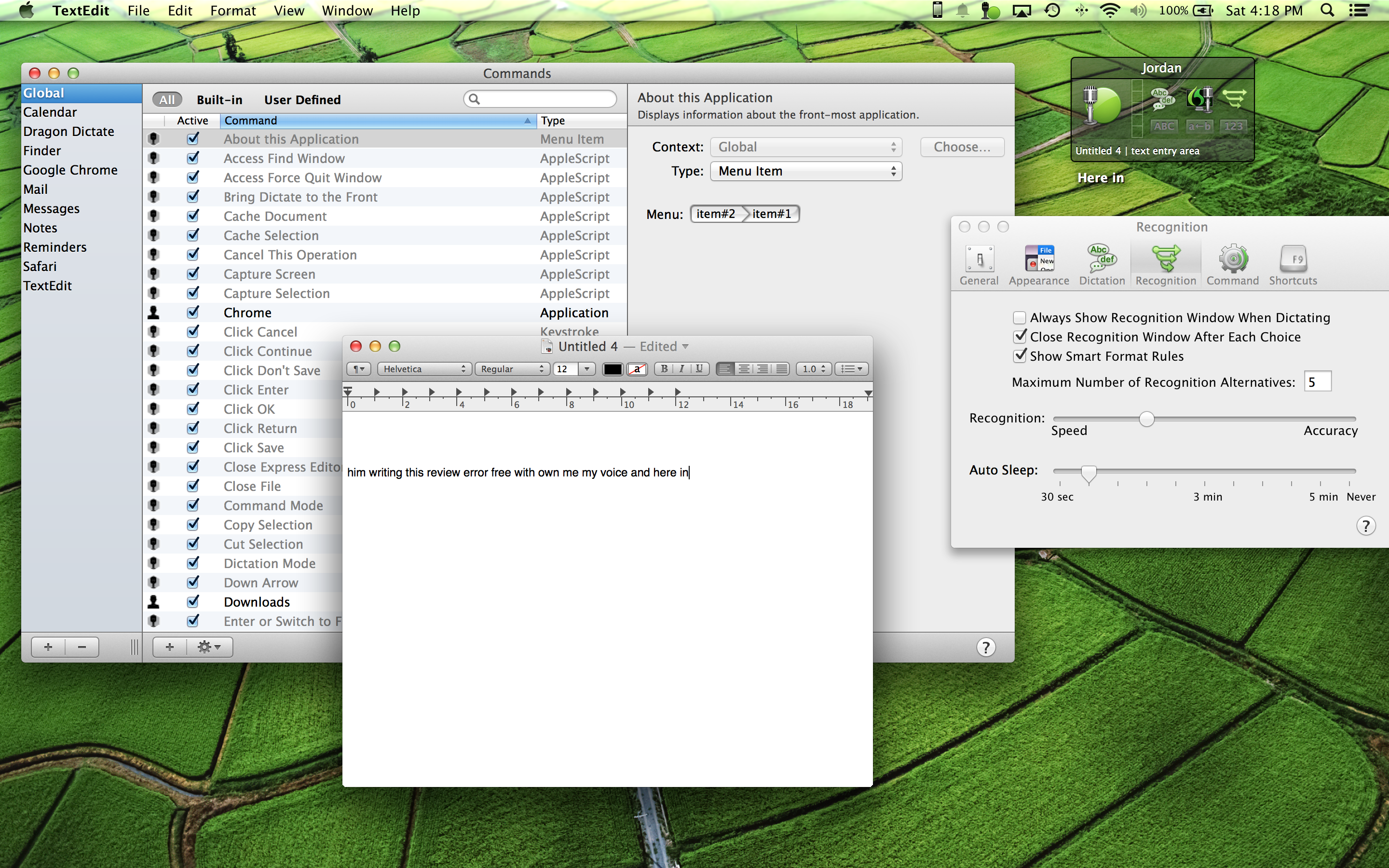 Using our voice to control computers has never really taken off. For many of us, using voice recognition technology wasn’t even a consideration until features like dictation and Siri arrived on our iPhones and iPads. There’s good reason too: the voice recognition features built into our devices have always had the reputation of being half-baked. They simply aren’t accurate and consistent enough to replace our tried and trusted mouse and keyboard or touchscreen. While half decent dictation features come with every Mac (and are powered by Nuance’s technology), the voice recognition features you get with latest version of Nuance’s Dragon Dictate for Mac go well beyond simply dictating speech to text.

When people think Nuance and Dragon Dictate they typically think speech to text dictation features. After reading a bit of text and walking through a brief tutorial (about 10 minutes total), the app is remarkably accurate at understanding your voice and dictating speech consistently. If you haven’t tried full-blown dictation software like Dragon in recent years like myself, you’ll truly be amazed at how precise the program is at dictating error-free text as you speak naturally. There’s no need to speak slowly and carefully to make sure every word is recognized, and there’s no waiting around for the software to catch up to what you’re saying. 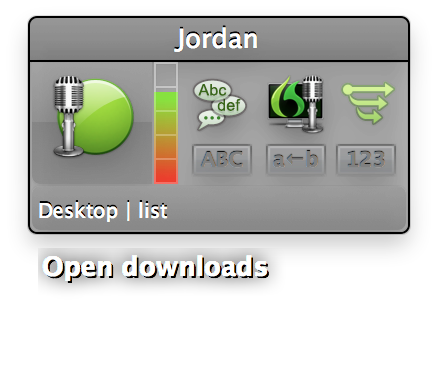 So will I be writing my articles for 9to5Mac by simply speaking and having Dragon dictate from now on? Nope. Dragon Dictate won’t let you plow through a 5000 word piece nearly as quick as you’d type it, mainly because learning the commands necessary for formatting and corrections is like learning a new language. Basic commands seem easy enough to remember while dictating— Caps on, close quote, comma, ‘apostrophe ess’, insert, correct, new line— but in practice having to speak commands to properly format a sentence as you dictate takes away from the freedom of being able to capture your thoughts as you speak freely. I personally found the software much more useful for composing short snippets of text that typically don’t require much formatting or a deep train of thought that might be interrupted by formatting commands, like emails, Tweets, reminders, lists, and brainstorming sessions.

Of course, that process becomes much easier as you memorize and become more comfortable with the commands. While for me it won’t be replacing my keyboard on a daily basis for writing, that doesn’t mean with a little practice dictation in Dragon Dictate 4.0 can’t be a powerful alternative if necessary. Dragon Dictate has long been a popular product among those with medical conditions like arthritis that limit the ability to type comfortably or at all.

Admittedly your mileage with accuracy might vary depending on your accent (I was using the U.S. setting since there is no Canadian accent preference), but there are also region settings for the UK, Singapore, New Zealand, Canada and India, as well as accent preferences for American, American- Inland Northern, American- Southern, American- Teens, Australian, British, Indian, Latino, and Southeast Asian.

For me, the real standout feature of Dragon Dictate 4.0 is the ability to control applications on your Mac using only your voice. Dragon Dictate comes with a number of built-in commands that allow you to control functions across apps like Finder, Mail, Messages, Notes and Safari, as well as commands for composing email or sharing status updates to Facebook and Twitter. It also has a powerful built-in command editor that lets you setup your own voice commands for just about anything you can think of. Launch, quit, or hide applications, search the web, open a file or folder, or create a new reminder using only your voice. I set up commands for opening new tabs and navigating to specific tabs in Chrome, switching between or launching my commonly used full-screen apps by simply saying the app’s name, initiating playback in Logic Pro, as well as opening files and folders in Finder. The command editor is easy enough for anyone to setup commands for opening apps, bookmarks, files and folders, menu items, and any keystroke either system wide or within an app, but also has the ability to use AppleScript, Automator workflow, Shell script, and text macro for more complex voice commands. Once you get used to speaking to your Mac and asking it to do things, you’ll wonder why you always haven’t been searching the web, navigating Gmail, and launching and switching between apps and folders with your voice. 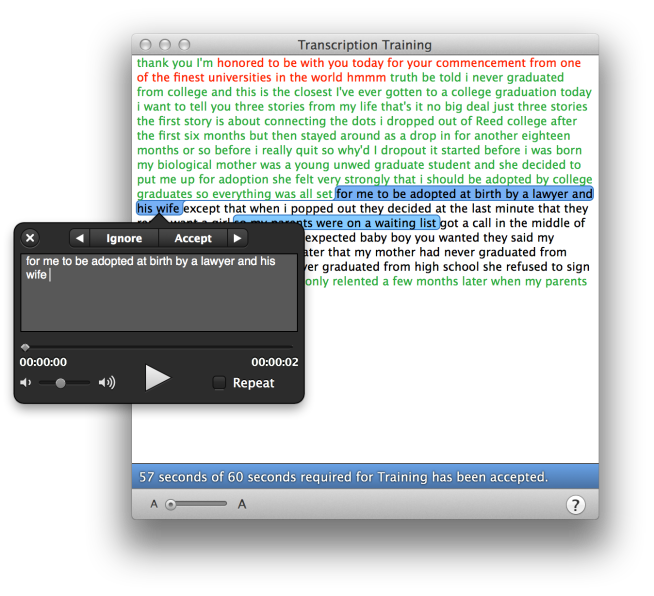 For those that have used previous versions of the software, the upgrade to Dragon Dictate 4.0 has a lot to offer on top of an overall bump in speed and accuracy. It includes the ability to transcribe from various audio formats like mp3, air, or wav files, a feature that previously required a separate $149 purchase of Nuance’s MacSpeech Scribe software. Once you select an audio file to be transcribed, Dragon Dictate immediately starts transcribing around 60 seconds of the file as best it can without any training— the accuracy of the initial text will depend a lot on the quality of the recording. After correcting or approving the 60 seconds worth of text it transcribes (I usually found a correction or two to be made every other line), the software takes a few minutes to create a profile for the audio and train itself to accurately transcribe the rest of the file. It’s not perfect, the final transcription typically had a number of errors to correct unless the audio source was the cleanest, professional voice recording imaginable with no background noise. The transcription also comes out as one big blob of text with no concern for punctuation or grammar. Don’t expect a finished product quality transcription, but since it can transcribe the text in only a fraction of the actual length of the audio and pretty accurately, it will certainly trim a lot of time off transcriptions of long audio files.

The new version also packs in a long list of commands specifically for controlling Gmail in Safari and Firefox with your voice, as well as some nice enhancements for dictating into Pages.

The biggest issue I ran into with Dragon Dictate 4.0 was background noise getting picked up. There are commands to mute the mic, put it to sleep, or have it auto sleep, but that doesn’t do much to combat background noise when you have the mic on while dictating commands. On a few occasions background noise from either my devices, pets or the street would launch apps unexpectedly or begin dictating text when I wasn’t speaking. This was mostly an issue when using my Macbook’s built in mic and of course wouldn’t be a concern in a perfectly quiet room. It’s also partly your Mac’s fault; using a standalone vocal mic positioned properly, a headset, or the Dragon Remote app that turns your iPhone into a mic for your Mac will minimize these issues.

Is it worth the cost?

Dictation might not be faster than typing, but that’s not the point. The ability to transcribe voice memos and other audio files you’ve recorded on the go and control anything on your Mac with your voice would make Dragon Dictate an excellent value even without everything else it offers. And for those that for some reason can’t type or just don’t want to, the dictation features are worth every penny if Apple’s built-in features simply aren’t enough.

Dragon Dictate for Mac 4 usually sells for $199.99 but is currently on sale for $179. An upgrade from previous versions of Dictate is available for $149.