inMarket, an in-store marketing platform that recently started rolling out iBeacons to retailers, today announced an interesting new twist for the platform: the first consumer packaged goods brand to take advantage of iBeacons in a retail environment. That means that rather than the retailer controlling the entire iBeacon experience and the location-based notifications that get beamed to shoppers, inMarket’s Mobile to Mortar (M2M) platform is giving that same opportunity to the individual brands on the store’s shelves. We’ve also learned it’s about to expand and continue its rollout of iBeacons in retail locations across New York, Boston, and Miami.

Mobile in-store marketing solution inMarket has partnered with Zatarain’s, a McCormick & Company brand and New Orleans tradition, to create the world’s first beacon campaign for a CPG brand. “We’ve been helping the world’s savviest brands reach shoppers in the age of mobile since 2010,” said Todd Dipaola, CEO and co-founder of inMarket. “Beacons are the next paradigm for advertising to conform to the lives of shoppers. Smartphones are getting smarter, and we are tremendously excited to break new ground with McCormick & Company. Zatarain’s has shown industry leadership to become the first CPG to drive shoppers to their product in store via beacons.” 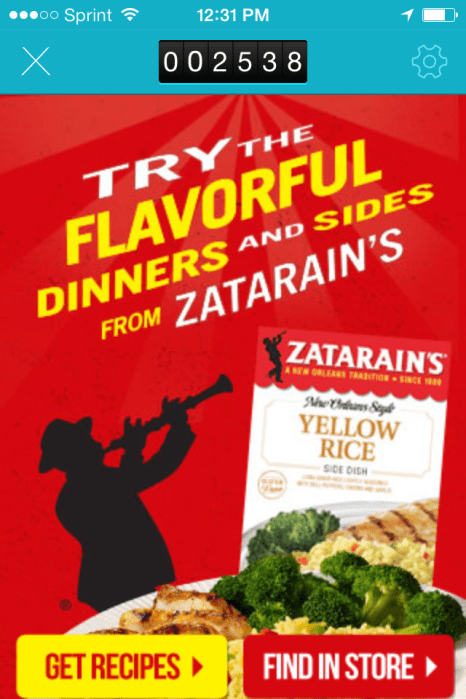 Zatarain’s will be sending grocery list reminders and offers/loyalty points at the point-of-sale through mobile apps (one of which is pictured to the right).

We’ve been seeing a ton of developers and companies taking advantage of Apple’s new iBeacons technology to send location-based notifications to iOS devices in close proximity to an Bluetooth LE-enabled iBeacon. Several retailers installed iBeacons after Apple put them in its own store and a few companies have popped up selling Bluetooth beacon hardware, software, and kits to let retailers set up their own iBeacon experience. Retail has certainly embraced the new technology more than anyone else, but up until now the retailers, not the consumer brands, have controlled the experience. M2M’s implementation of iBeacons allows brands to take advantage too and beam their own offers and notifications to customers in retail environments where they have shelf space.

The first brand to take advantage of the feature using inMarket’s M2M platform, Zatarain’s, will push its own advertisements and offers to shoppers in stores that have already rolled out inMarket’s iBeacon hardware. Back in January, inMarket announced it was rolling out iBeacons to over 200 stores including Safeway and Giant Eagle locations in San Francisco, Cleveland and Seattle. The company told us today it’s also in parts of LA and expanding to New York, Boston, and Miami in the coming weeks.  The iBeacon notifications are delivered to shoppers through the company’s own CheckPoints rewards app and List Ease shopping list app, but will also be available through partner apps that implement the platform.

The company says it’s currently reaching 20 million mobile shoppers and some of its clients include Coca-Cola, Kraft, Levi’s, Nestlé, and Procter & Gamble, so it’s more than possible we’ll start to see other inMarket’s partners take advantage of the M2M platform for iBeacon notifications. InMarket says the Zatarain’s campaign will first launch in Southern California retail stores before expanding nationally and hinted that a major app partner announcement is coming soon.