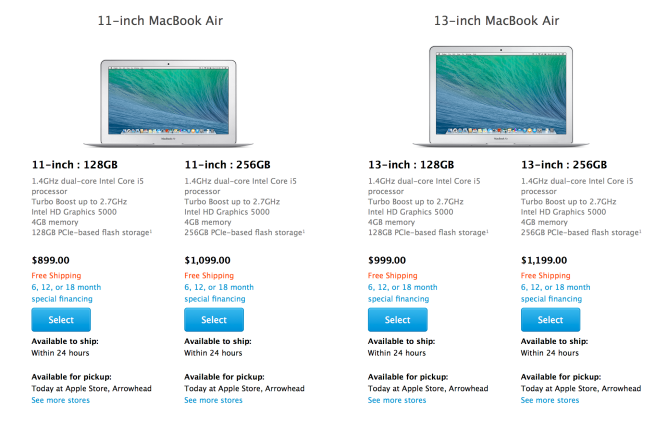 In line with our recent scoops, Apple has updated its MacBook Air lineup early this morning. The refresh features the slightly updated Intel’s Haswell processor and all models are now priced $100 less than the previous models. The design is exactly the same and we don’t expect any significant changes to the MacBook Air lineup until later this year.

The new models also received a slight bump in battery life for iTunes movie playback, with the 11-inch model jumping from 8 hours to 9 hours and the 13-inch model from 10 hours to 12 hours. Compare the new and old below:

As mentioned above, we expect to see significant changes in this department later on in the year with the possible release of a 12-inch MacBook with Retina display that will offer the portability of he 11-inch model, but the power of the 13-inch model. As you can see from the image below outlining the last model’s specifications, there’s not much new to get excited about. That being said, the Air is at the top of the ultra-portable laptop game and any improvements, however slight, once again yield  the best ultra-portable laptop in the world.

Apple SVP of Worldwide Marketing Phil Schiller had this to say per the company’s press release:

“With MacBook Air starting at $899, there’s no reason to settle for anything less than a Mac,” said Philip Schiller, Apple’s senior vice president of Worldwide Marketing. “Macs have never been more popular, and today we’ve boosted the performance and lowered the price of MacBook Air so even more people can experience the perfect everyday notebook.”

The baseline 11-inch and 13-inch MacBook Air are priced at $899 and $999, while the high end base configurations are listed at $1,099 and $1,199. All models are available today in retail locations and on Apple’s online store with expected shipping availability within 24 hours.

CUPERTINO, California—April 29, 2014—Apple® today updated MacBook Air® with faster processors and lower prices, making the perfect everyday notebook an even better value. Now starting at $899, MacBook Air features powerful processors, fast flash storage, 802.11ac Wi-Fi, up to 12 hours of battery life and Apple’s iLife® and iWork® apps, giving you everything you need to handle all your work, all day long.

“With MacBook Air starting at $899, there’s no reason to settle for anything less than a Mac,” said Philip Schiller, Apple’s senior vice president of Worldwide Marketing. “Macs have never been more popular, and today we’ve boosted the performance and lowered the price of MacBook Air so even more people can experience the perfect everyday notebook.”

iLife and iWork come free with every new Mac®. iLife lets you edit your favorite videos with iMovie®, create new music or learn to play piano or guitar with GarageBand®, and organize, edit and share your best shots with iPhoto®. iWork productivity apps, Pages®, Numbers® and Keynote®, make it easy to create, edit and share stunning documents, spreadsheets and presentations. iWork for iCloud® beta lets you create a document on iPhone® or iPad®, edit it on your Mac and collaborate with friends, even if they are on a PC.

Every Mac comes with OS X, the world’s most advanced operating system, which is designed for ease of use even while taking full advantage of the powerful technologies built into every Mac. The latest version, OS X Mavericks, introduces more than 200 new features, including core technologies designed specifically for notebooks to boost performance and improve battery life. Mavericks introduces amazing apps like iBooks®, which gives you instant access to your iBooks library, more than two million titles in the iBooks Store™, and works seamlessly across your Apple devices. The new Maps app allows you to look up directions on your Mac and send them right to your iPhone or iPad, and with iCloud, whatever you do in apps like Mail, Contacts and Calendar also appears on your other devices.