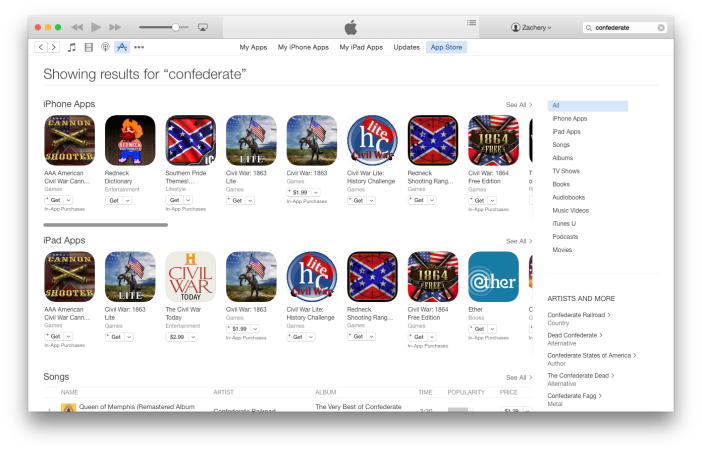 Apple’s App Store should join Amazon, eBay, Walmart and others in boycotting the Confederate Flag

[Update 6/25/15: Apple has begun removing apps that “use the Confederate flag in offensive or mean-spirited ways” without removing apps with “educational or historical uses”.]

Apple’s Tim Cook added his voice to the chorus of CEOs speaking against displaying the Confederate Flag on Sunday, indirectly referencing it as a symbol for racism. In a tweet, Cook called to honor the lives of the victims in last week’s tragic South Carolina shooting by “eradicating racism & removing the symbols & words that feed it.” An Alabama native like myself, Cook has been a strong proponent for equality during his tenure as CEO, often speaking out against the South’s tarnished history and the changes we still need to address.

Apple tends to be a leader in the movement for equality and inclusion, but over the last few days the company has let other tech giants like Amazon and eBay lead in this space. In all fairness, the physical goods sold by physical retailers and online vendors are much less abstract than digital software with icons and artwork displaying the Confederate flag. These companies have also received growing pressure from customers to make this decision to support the boycott.

Still, a quick search on the App Store for ‘Confederate’ reveals iconography and artwork that displays exactly the symbol that Tim Cook spoke against on Sunday. One app, a game called Redneck Shooting Range, displays the flag behind a rifle scope. Another app, Southern Pride Themes, promotes the Confederate flag as an iPhone wallpaper.

I don’t believe Apple should censor historical content or remove informational material from iTunes or the App Store, but if a user wants to use the Confederate flag as a wallpaper, let them rely on an online image search and not an App Store app for creating that experience.

Apple controls the experience that customers have in its App Store in many controversial ways. Removing content that celebrates the Confederate flag should not be viewed as such.

The company could cite the App Store’s guideline against personal attacks, 14.1 specifically, which reads that “Any App that is defamatory, offensive, mean-spirited, or likely to place the targeted individual or group in harm’s way will be rejected.” I believe it’s crystal clear where Tim Cook’s heart is on this decision, and guideline 14.1 addresses his description of “removing the symbols & words” that feed racism.

App Store guideline 19.1, which addresses religion, culture, and ethnicity, is also relevant as it says that “Apps containing references or commentary about a religious, cultural or ethnic group that are defamatory, offensive, mean-spirited or likely to expose the targeted group to harm or violence will be rejected.”

Tim Cook and company may vary well already be in motion on making this decision, but Amazon and Walmart are certainly leading in not supporting the Confederate flag. While the it may be seen as censorship or controversial, I believe Tim Cook has shaped Apple during his tenure to execute such a decision without distracting from the day-t0-day business of running Apple.

See Arkansas. See Indiana. See Arizona. In those instances, Cook and Apple stood against controversial legislation in the spirit of equality. In this instance, even the politicians that publicly supported the Confederate flag as recently as over the weekend are listening to their constituents and changing their mind. Still think this would be un-Apple? See Cook’s commencement address at George Washing University.

As a Southerner having lived across Mississippi, Alabama, and Georgia over the years, I know that a small group of Apple’s customers would view this decision unfavorably as a quick read over my Facebook news feed tells me where some of my friends and family in the South sit on this issue. But for many, myself included, that flag has never been anything but a painful reminder of a part of the South’s heritage that we should never be proud of, no matter how much we love where we come from.

And while it’s a shame it has taken a tragic shooting in South Carolina to make this a national conversation, I’m moved by the number of politicians, companies, and communities recognizing the Confederate flag as a symbol that invokes pain for many. I hope Apple will move as quickly to support this boycott as it did to adjust its Apple Music free trial policy on Sunday. With another customers addressing the Confederate flag’s presentation on the App Store, I believe Apple will quickly make the decision to pull these references.