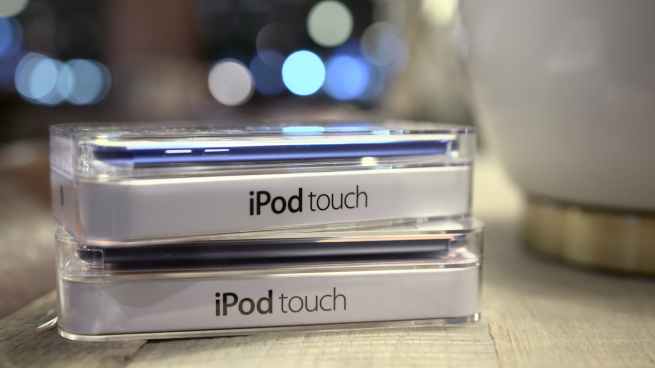 Today we’re taking a look at Apple’s 6th generation iPod touch for 2015 and determining whether or not it’s worth the money. It’s been a while since the iPod touch has been refreshed and even though it’s a minor one, this time around it brings along some important changes. If you’ve had Apple’s iPod touch on your must-have gadget list, there are a few things you need to know…

The packaging is exactly the same and you won’t find much inside, but getting into the box, we have the 6th generation iPod touch front and center. Lifting the paper flap beneath will reveal the included accessories. As expected, we have a quick start guide, two Apple stickers, a USB to Lightning cable, and Apple’s EarPods.

As you can probably tell, the design has remained almost exactly the same this time around, but Apple has added a few new color variations to the mix and taken out the strap option. You can pick up the iPod touch in Silver, Gold, Space Gray, Pink, Blue, and Product Red and are all currently available on Apple’s Online Store.

This iPod shipped with iOS 8.4 and comes along with Apple Music as well. Most of Apple’s updates to this iPod happened on the inside, but there are a couple of external changes to mention. First off, if you were hoping for a larger display, that didn’t happen. We still have the same 4-inch display here with a resolution of 1136 x 640. On the back side, Apple has updated the camera quality quite a bit.

Check out our unboxing, review, and comparison video below:

There’s an 8-megapixel camera that’s in line with the one we saw on the iPhone 5s and can shoot up to 120 frames per second Slo-Mo video at 720p. The last generation shipped with a 5-megapixel rear shooter, so this is definitely a welcomed upgrade. Another change here may be seen as a downgrade to some, but Apple has ditched its Loop accessory and the metal connector that used to pop up on the lower back side.

Internally, Apple has included the A8 processor, M8 motion co-processor, and Bluetooth 4.1 to power the iPod touch. What does that mean for you? Performance and a ton of it. This iPod touch is now roughly on point with the iPhone 6 (smaller amount of pixels to push vs. stepped down A8 processor). Performance is great and it kicks the crap out of the 5th generation iPod touch when you compare the benchmark scores (shown in the video above). There’s no contest. Everything is buttery smooth and thanks to the 1GB of RAM inside you can do more at the same time. 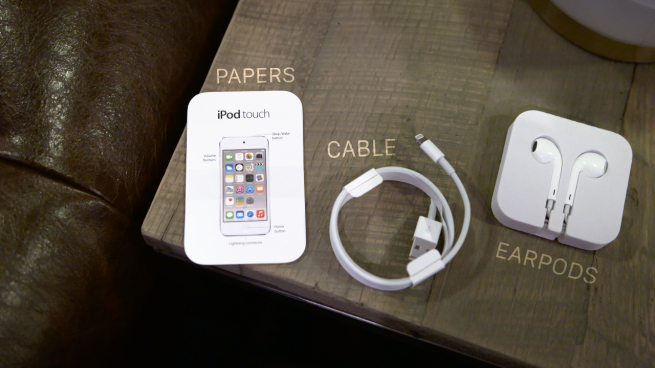 Inside of the box

Battery life should be roughly the same as the last generation, but that’s still pretty good. Unfortunately, Apple decided not to include NFC and the Touch ID home button for Apple Pay and unlocking the device, and/or using for in-app purchases like some iPad models. It’s not a complete deal breaker though as I assume that would have driven up the price.

This iPod touch comes in 16, 32, 64, and even 128 GB storage configurations, but who’s it for and which one should you buy? If you have an iPhone it’s not really worth owning, but for anyone else it’s a great way to get familiar with the iOS ecosystem. This makes a perfect portable gaming device, and it’s great for movies, music, browsing the web and any other media related task. It’s not perfect, but finally the iPod touch is on the same performance level as Apple’s other iOS devices and I think a lot of people can appreciate that. Based on the performance and camera improvements alone, I’d say this iPod touch is worth having, but only if you don’t already have an iPhone. 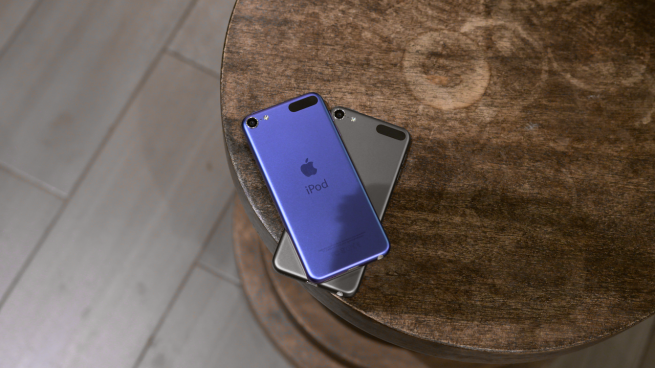 If you’re in the market to purchase an iPod touch, there are a couple of routes you can go. Apple’s base model (16GB) starts at $199 and is a very easy buy for anyone curious about using iOS or a low entry price for those worried about breaking an expensive off-contract iPhone. Most of size capacities (16, 32, 64GB) steps up in $50 increments with the exception of the $100 jump to the 128GB model which comes in at $399. Your best bet is to stick with either a 16 or 32GB model. This will keep money in your pocket for the same experience, but it really depends on what you’ll be using it for.e a

One other option to compare against: The similarly equipped iPhone 5s can now be found in the $300s and offers everything that the current iPod does but with LTE radios and GPS. An iPhone 5 or 5c can be found around the same $200 starting point and you get the same camera, screen and slightly slower performance.