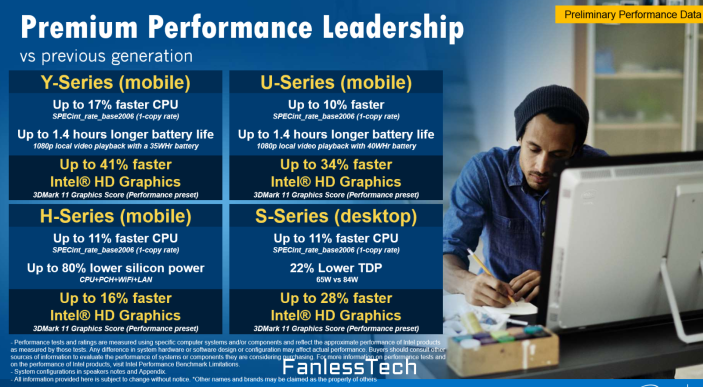 Intel’s upcoming processor refresh with Skylake appears to be promising for Mac users awaiting a significant performance upgrade. Internal Intel slides leaked by the website FanlessTech describe the year-over-year advancements and performance improvements from Broadwell to Skylake chips. As Apple is expected to include Skylake processors from Intel in refreshed hardware later this year or early next year, these specs give us a preview of what is likely coming to the Mac’s performance.

As far as advancements go, the upcoming Skylake chipset boasts better low power CPU performance and a 30% longer battery life compared to its predecessor. According to the leaked slide, Broadwell capped out at 8.5 hours with the test configuration while the Skylake chips will deliver 11.3 hours hours of performance with the same test configuration.

Apple most recently updated its 15-inch MacBook Pro lineup in May with refreshed hardware including a Force Touch trackpad but old Haswell processors while the MacBook Air and 13-inch MacBook Pro picked up new Broadwell chips in March. The chipset also adds support for new technologies including wireless charging, although current Macs don’t yet support such features.