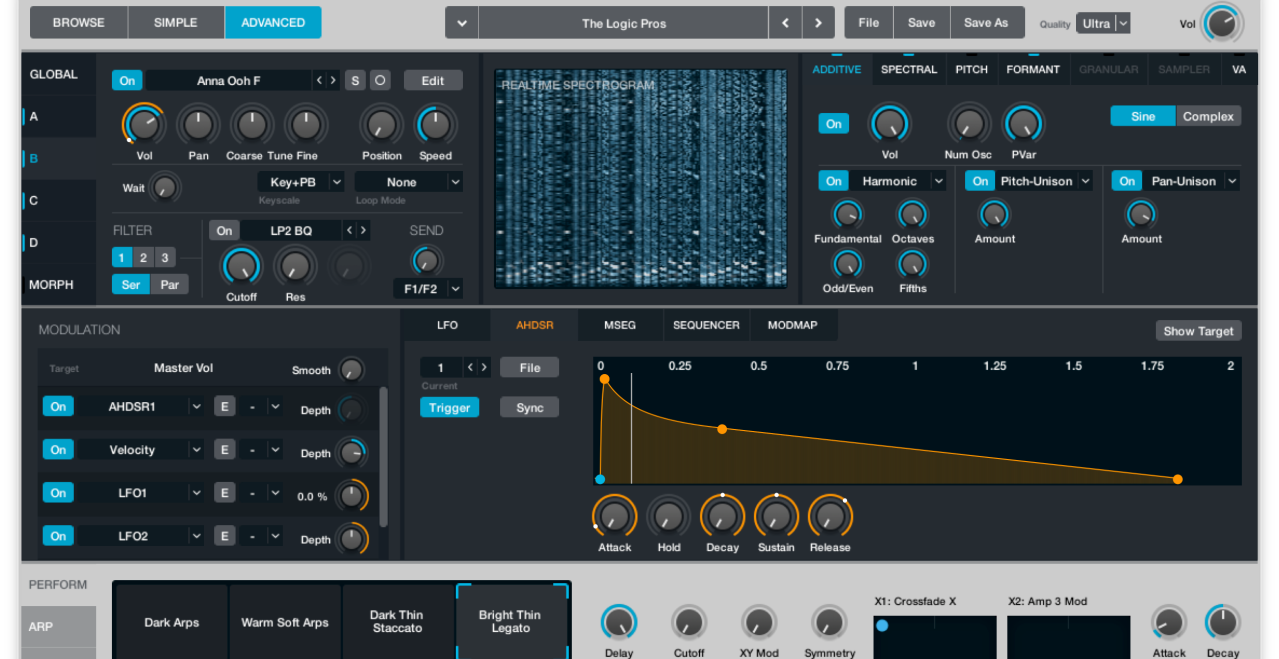 In this week’s episode of The Logic Pros, we are putting a hold on hardware month for the Logic Pro X 10.2.0 update. Apple is back at it again with another incredibly substantial offering. After it acquired Camel Audio back in January, hopes were high that some of the company’s world-class production software would make its way to Logic and Garageband, and now it has: While we aren’t getting all of Camel’s fantastic software lineup, an updated version of its flagship software synth Alchemy is now free to all Logic Pro X users. Previous to the Apple acquisition, Alchemy was $249 on its own and well revered among music producers. It, in my opinion (and many others), stands toe-to-toe with just about any of the heavy hitters out there, and we are now getting the full package (and then some) for free inside of Logic. 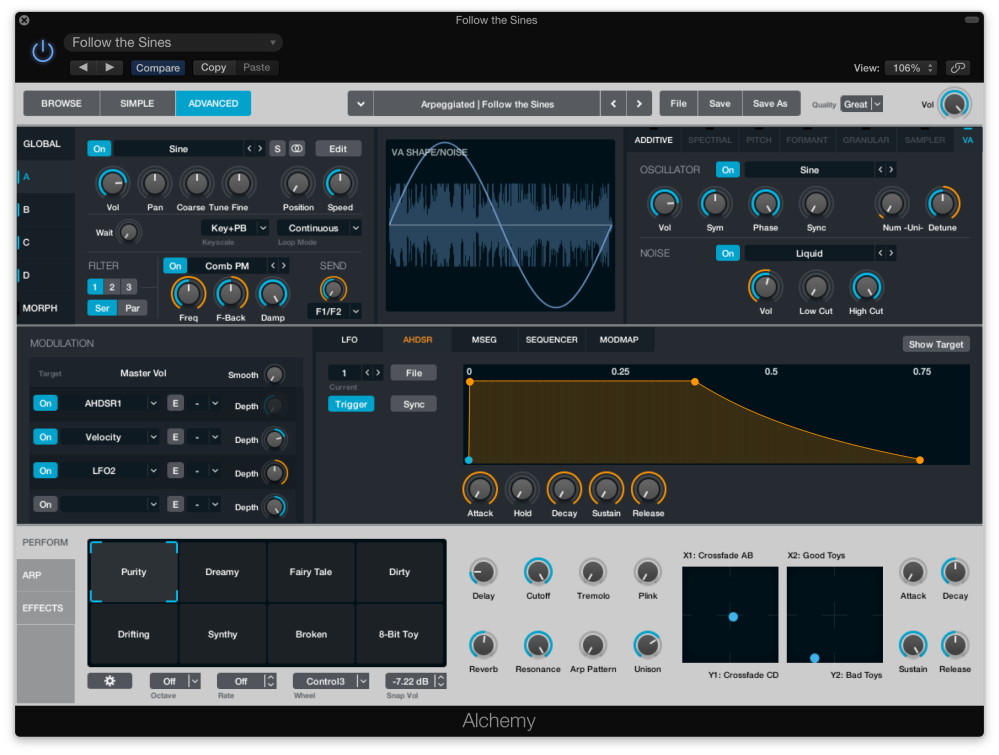 Known as a sample-manipulation synthesizer, Alchemy is capable of multiple synthesis and sampling types, along with a number of creative ways to blend the two. With Camel’s pedigree as a fantastic stand alone effects maker, and what seems like an endless number of ways to layer and transform sounds, Alchemy truly is a powerhouse instrument unlike anything Logic Pro X users have ever seen bundled in for free.

At its core, Alchemy is a 4-part sampler/synthesizer. Each of which can house a different sound entirely, separately routed to one of three multi-mode filters and the ability to be layered on top of each other. There are up to as many as 7 different synthesis/sampling types to play with/combine for each, including straight virtual-analog (wavetable), additive synthesis, formant shaping, and various sampling types: granular, spectral, and more. Along with the straight up sampling/subtractive-style synthesis options that rival just about anything out there, these more unique analysis options allow producers and musicians to get creative in ways you just don’t find very often.

As for the filter, there are 8+ Low, High and Band Pass options on top of a series of less traditional notch, formant, and ring-style types. The modulation matrix is just as fully featured as the filter with 7 sync-able multi-mode LFOs, 3 AHDSR envelopes, 2 multi-segment envelopes, a sequencer and up to as many as 15 different Mod maps. It isn’t hard to see why many musicians happily paid $250 for this thing.

We essentially have 3 main view modes for the UI: Browse, Simple and Advanced. Along the bottom of the easy-to-use Browser, you’ll find some of Alchemy’s macro controls (known as Perform), the Effects bank and and its 4-way Arpeggiator:

The Effects bank is filled with excellent sounding reverbs, delays, distortions, compressors and more, of which we can load up to 16 per patch. We are also seeing the return of what was already one of the best arpeggiators out there. There are 4 completely discreet Arpeggiators for each of the synth’s parts, each with various mode, pattern and timing controls, along with micro level editing on a note-by-note basis.

The Perform tab houses Alchemy’s powerful macro level controls. This panel is doubled in the Simple tab along the top of the UI and in the selected track’s Smart Controls in Logic. It is highlighted by the 8 way, modulation Transformation Pad along the left. Each preset can have as many as 8 different modulation destinations, effects, and well just about any sound shaping control on the instrument, routed to each of the 8 pads. This allows the musician to smoothly transition between each of the parameters to morph the sound in interesting and completely customizable ways. To the right of the Transform section we see the send levels for each of the 8 pads followed by two X/Y pads we can route any which way we like as well. While likely more useful for live performance, these controls can also be a fantastic way to simplify complex routing set-ups or for beginner level users to get more mileage out of the already impressive list of presets Alchemy comes with.

A few quick notes to keep in mind after downloading the new update:

Alchemy will appear in your list with a bunch of great sounds after downloading the new Logic update. But if you go up to the “Download Additional Content…” option in the Logic Pro X menu up top, you’ll find a few more. And by a few more I mean nearly 15GBs worth of free content, expanding Alchemy’s library to about 3,100 presets. Boom! 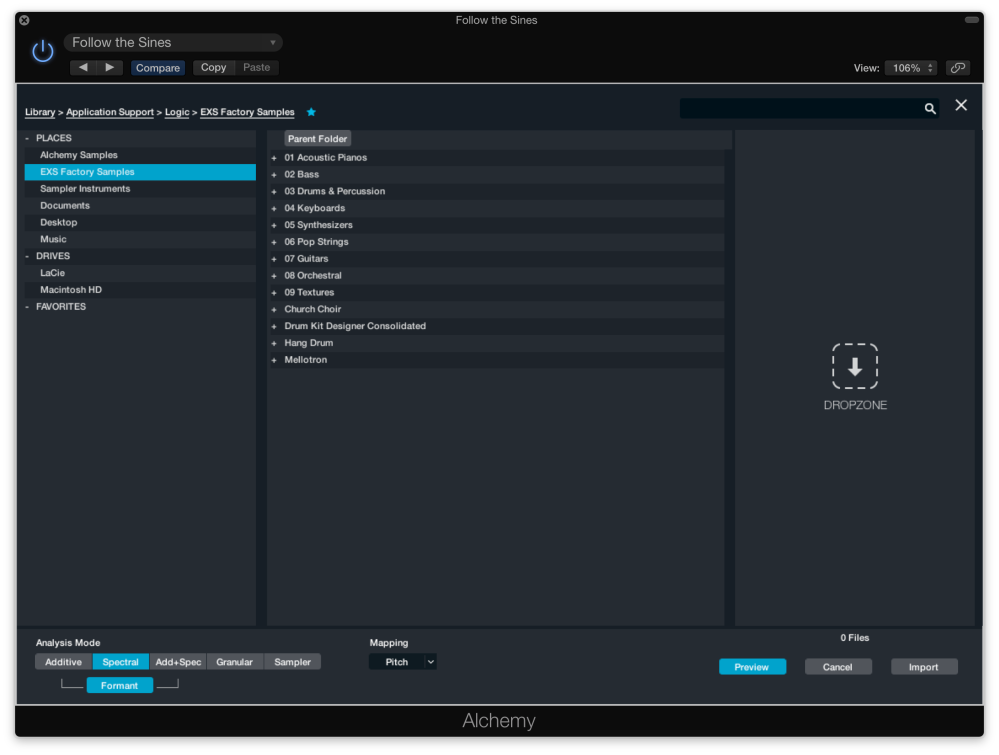 Those who were using Alchemy before Apple snatched it up, you can still use all your legacy presets. It looks just about everything from the Camel release is loading up inside Apple’s version. And lastly, while I’m still a fan of the aging, lightweight EXS 24 sampler, you’ll be able to get some more mileage out of its sampler instruments by loading them up inside of Alchemy’s sampling engines.

All-in-all, I can’t say I am overly surprised Camel’s work is starting to appear in LPX, but a full blown and fine-tuned version of Alchemy for free is pretty amazing. From the wavetable style options, plethora of filter types and what might be some of the most interesting and unique sample manipulation tools I have ever used, it’s hard to believe it’s in Logic for free now.

You can get a full break down of what the rest of the Logic Pro X 10.2 update had to offer here and Apple has some great audio examples up as part of the new Alchemy section of its site.

The Logic Pros is a regular series exploring all of the most interesting gadgets and software for making music on your Mac/iOS devices. If there is any gear you would like us to take a closer hands-on look at, let us know in the comments section below or shoot us an email.