Review: Apple’s $329 iPad is not without compromise, but a solid buy for upgraders and new users [Video] 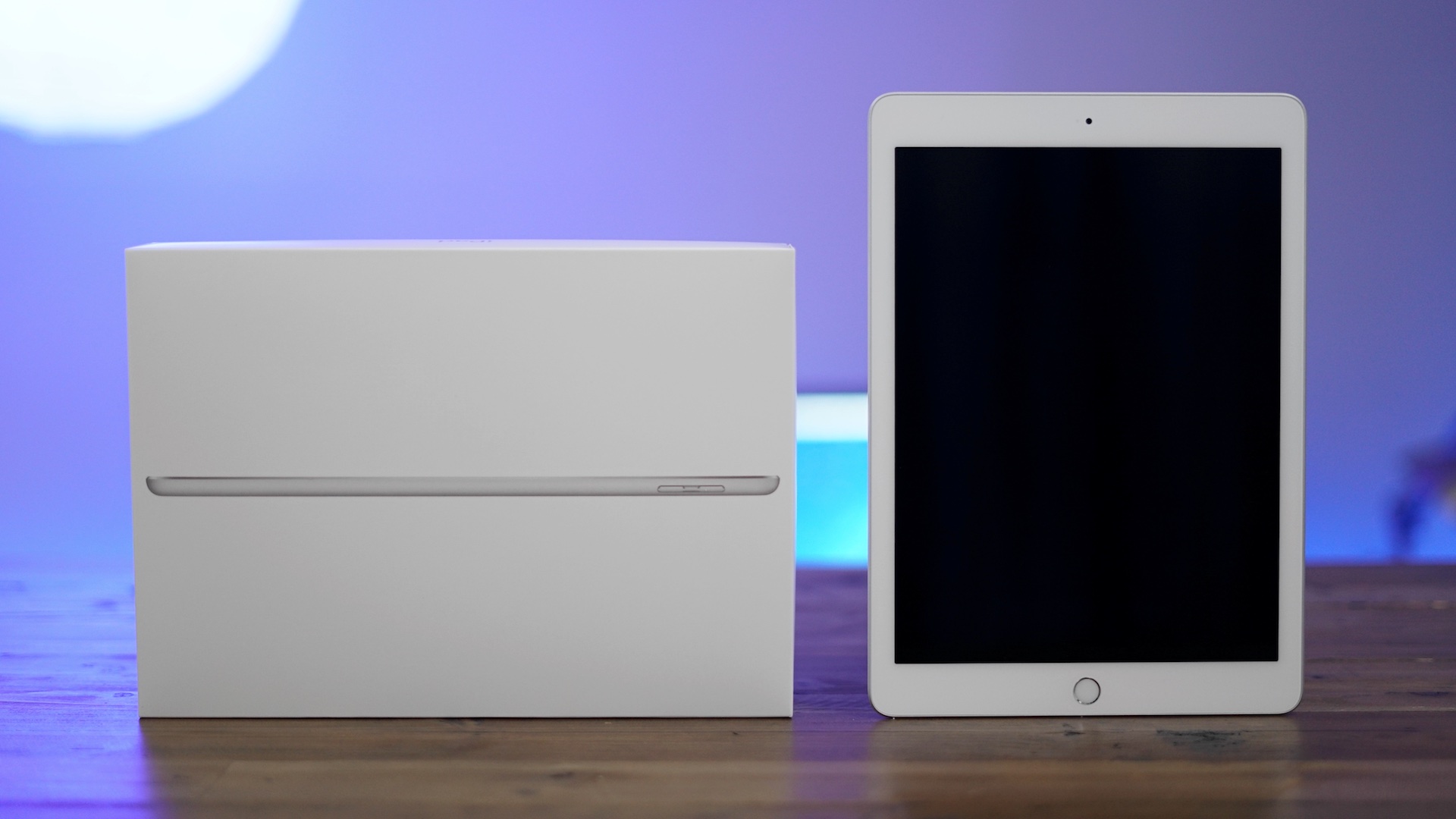 I fully expected to outright dislike the new budget-friendly 9.7-inch iPad, but it’s the type of product that’s hard to hate. Sure, it lacks the gorgeous laminated, anti-reflective display of the iPad Air 2, and sure it’s not as svelte in either thickness or weight. But there’s no denying that the 2017 iPad with A9 dual core processor in tow, is a good value.

With base model storage starting at a healthy 32 GB, the new iPad is priced so reasonably that it’s almost an impulse buy for anyone previously on the fence about iOS tablets. No longer do you have to pay an extra $100 to obtain a model that will actually work over the long haul from a storage perspective. No longer are you left with an anemic processor that feels somewhat feeble after an iOS update or two.

Even with its obvious shortcomings, the 2017 iPad is worth considering as long as you know what you’re getting into. If you’re brand new to the world of iOS, or you’re coming from a pre-iPad Air device, then you may want to seriously consider the new iPad. Watch our hands-on video walkthrough as we explain.

The most “glaring” downside

The biggest downside for those considering the new iPad is its most glaring — literally. The 5th generation iPad (Apple doesn’t count the Air series as a part of the same line) lacks the laminated digitizer and the antireflective coating found on more expensive models. This amounts to more glare on the 2048-by-1536-pixel Retina display when in bright settings, which will cause you to have to boost the brightness.

More notably, the lack of a laminated digitizer also results in a disconnected feeling from the content on-screen. There is a noticeable air gap between the glass panel, and the screen content below, just like there was on the original iPad Air and models that preceded it. The presence of an air gap only intensifies the glare in bright settings.

For me, those are the two biggest flaws on an otherwise value-packed device.

The new iPad features a form factor that’s similar to the original iPad Air. That means that it’s not only thicker, but heavier than the iPad Air 2 and the 9.7″ iPad Pro. This is a definite downside, but I feel like most people who are in the market for a cheap iPad will be fine with the added girth. 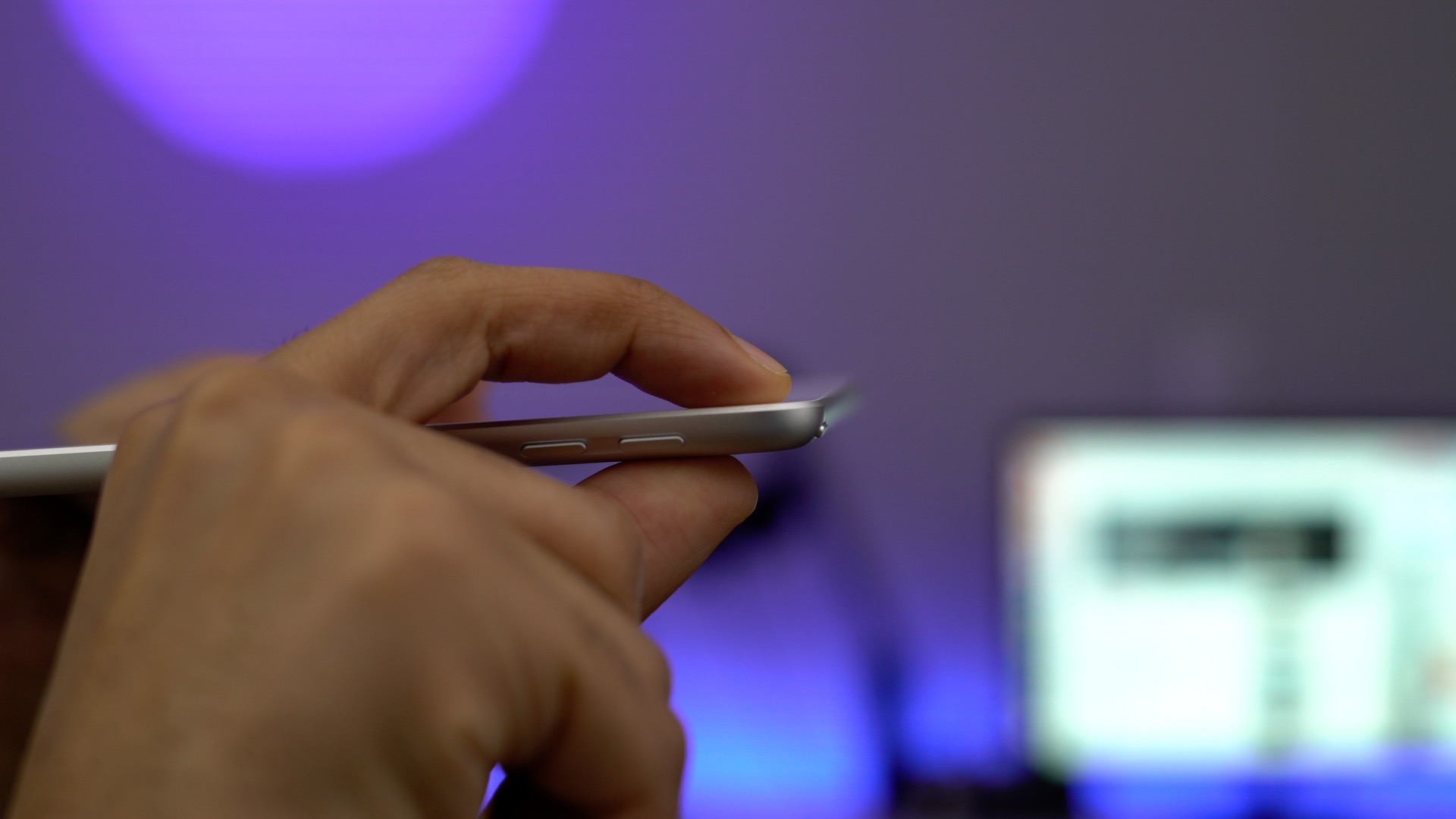 Slightly thicker than the iPad Air 2

The iPad is thicker and heavier, but not so much that it becomes a burden during every day use. And if you’re coming from a device prior to the iPad Air 2, you’ll be none the wiser. 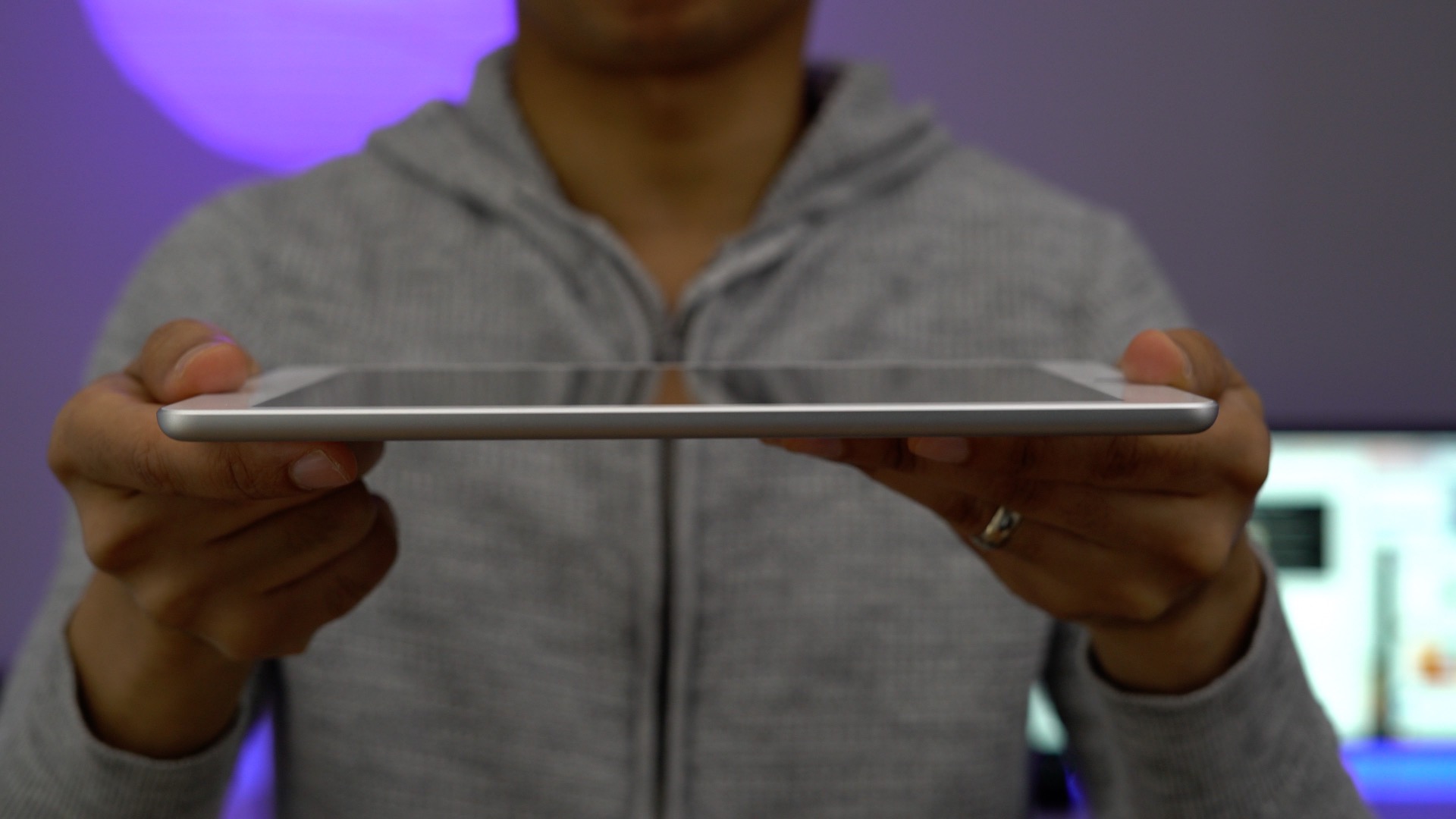 Outside of the aforementioned downsides, the 2017 iPad shoehorns a lot of value into a small price. You get a 64-bit dual core (1.85 GHz) A9 processor that features faster single core performance than the A8X found in the iPad Air 2, and comes within striking distance of the Air 2’s multicore scores. 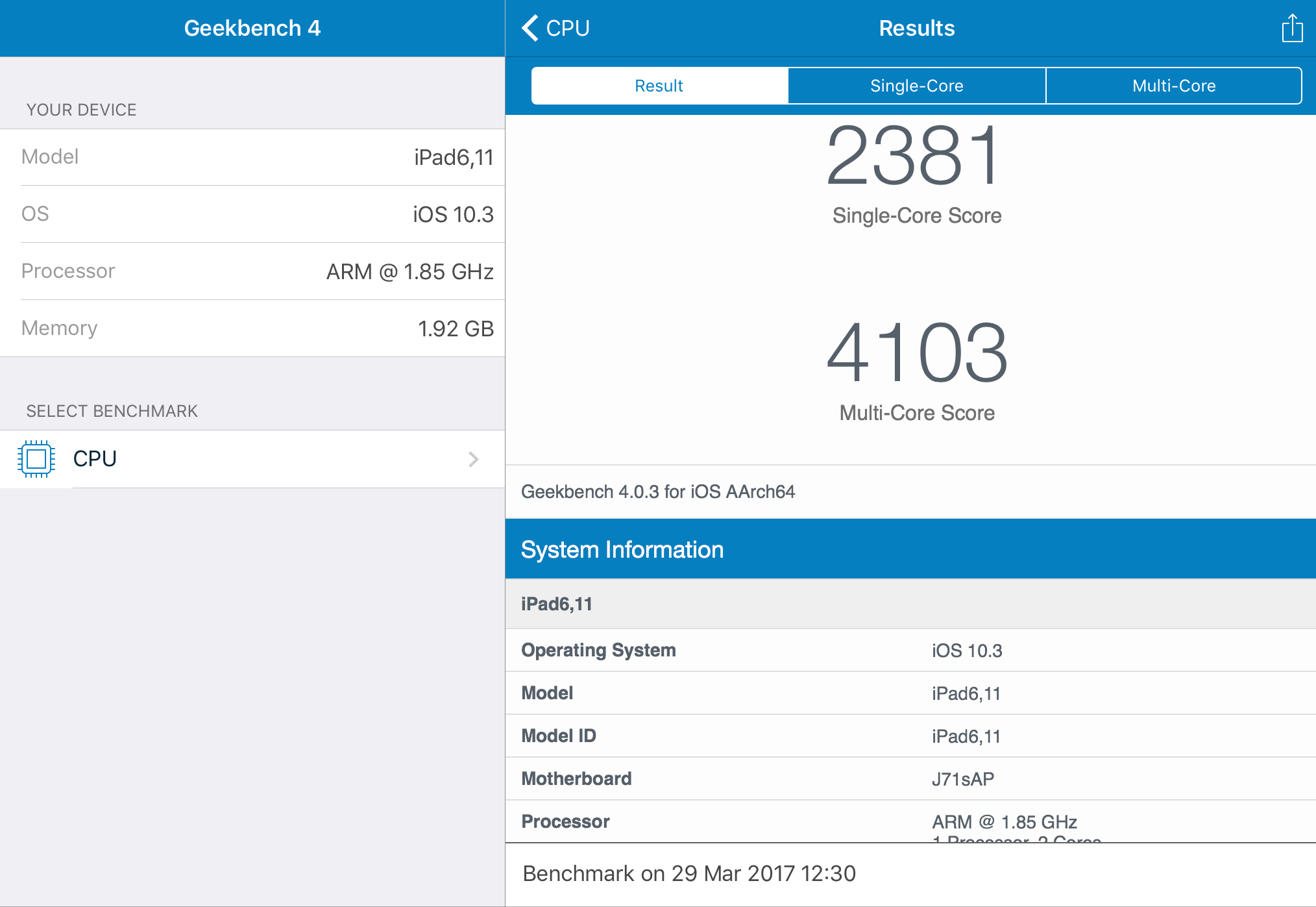 Impressive performance from a $329 tablet

The 2017 iPad features the same silicon that’s found in the iPhone 6s, hence it packs enough speed to run iOS 10 without any hiccups. It’s also a capable enough processor to where it can run the latest games, and edit and export 4K video without breaking much of a sweat. 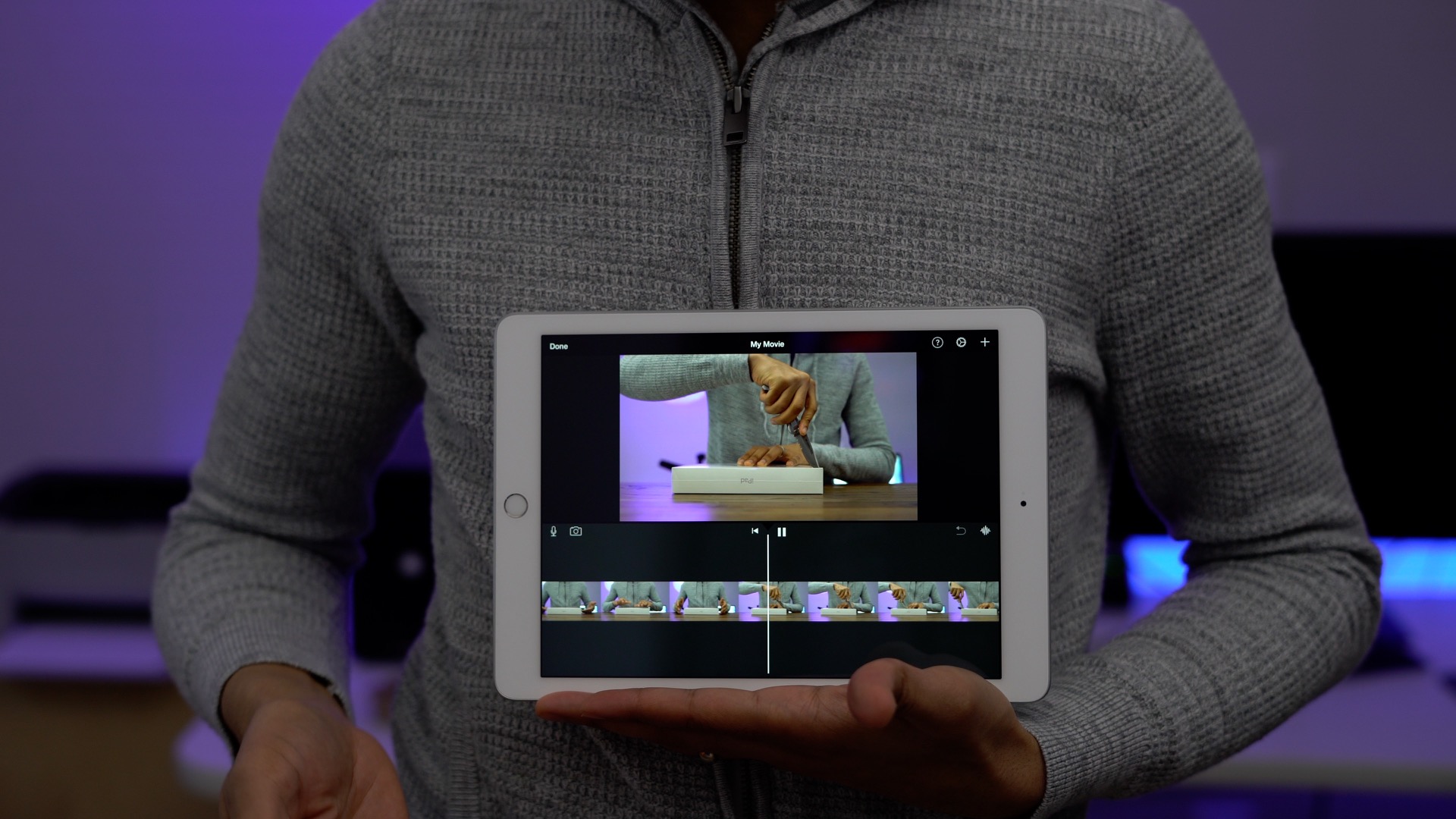 Unlike the original iPad Air, the 2017 iPad comes with 2GB of RAM, which makes a massive difference in performance, especially when browsing the web with multiple tabs and switching between apps.

Where the new iPad may lack somewhat in aesthetic appeal, it makes up for in performance. Only the iPad Pro is faster than the $329 iPad when it comes to single core performance.

Despite packing a larger battery than both the iPad Air 2 and 9.7″ iPad Pro, Apple rates the 2017 iPad at 10 hours of battery life on Wi-Fi. Given the size differences between batteries, that seems a bit conservative. 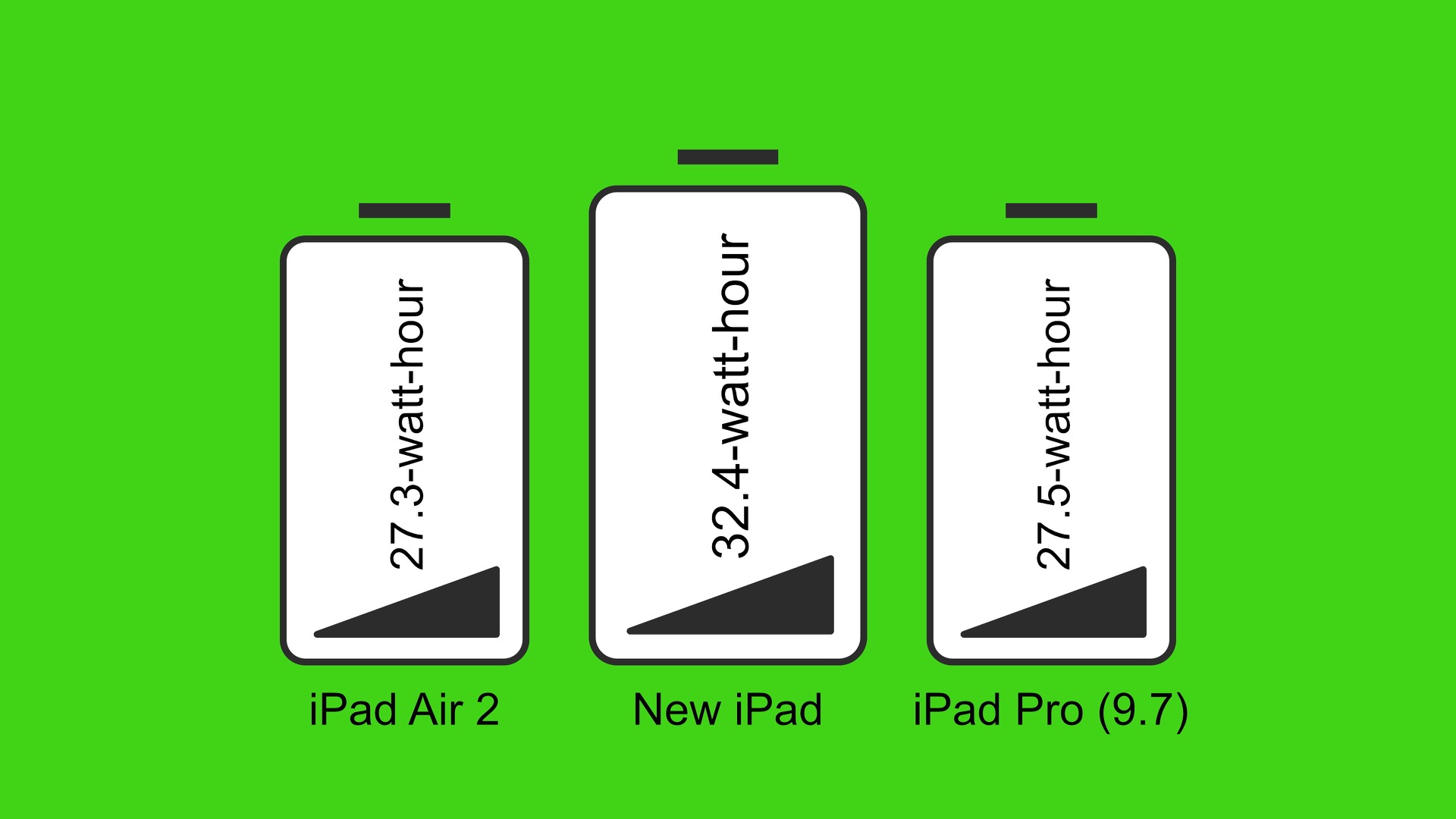 Perhaps Apple reasons that users will keep the brightness higher on this iPad when compared to newer models in an effort to combat the lack of advanced antiglare properties. Apple also claims that the screen itself is brighter, but there are some lingering questions about that claim. Since the screen is the biggest battery drainer, I could see how the extra battery might be used to help compensate for screen brightness. 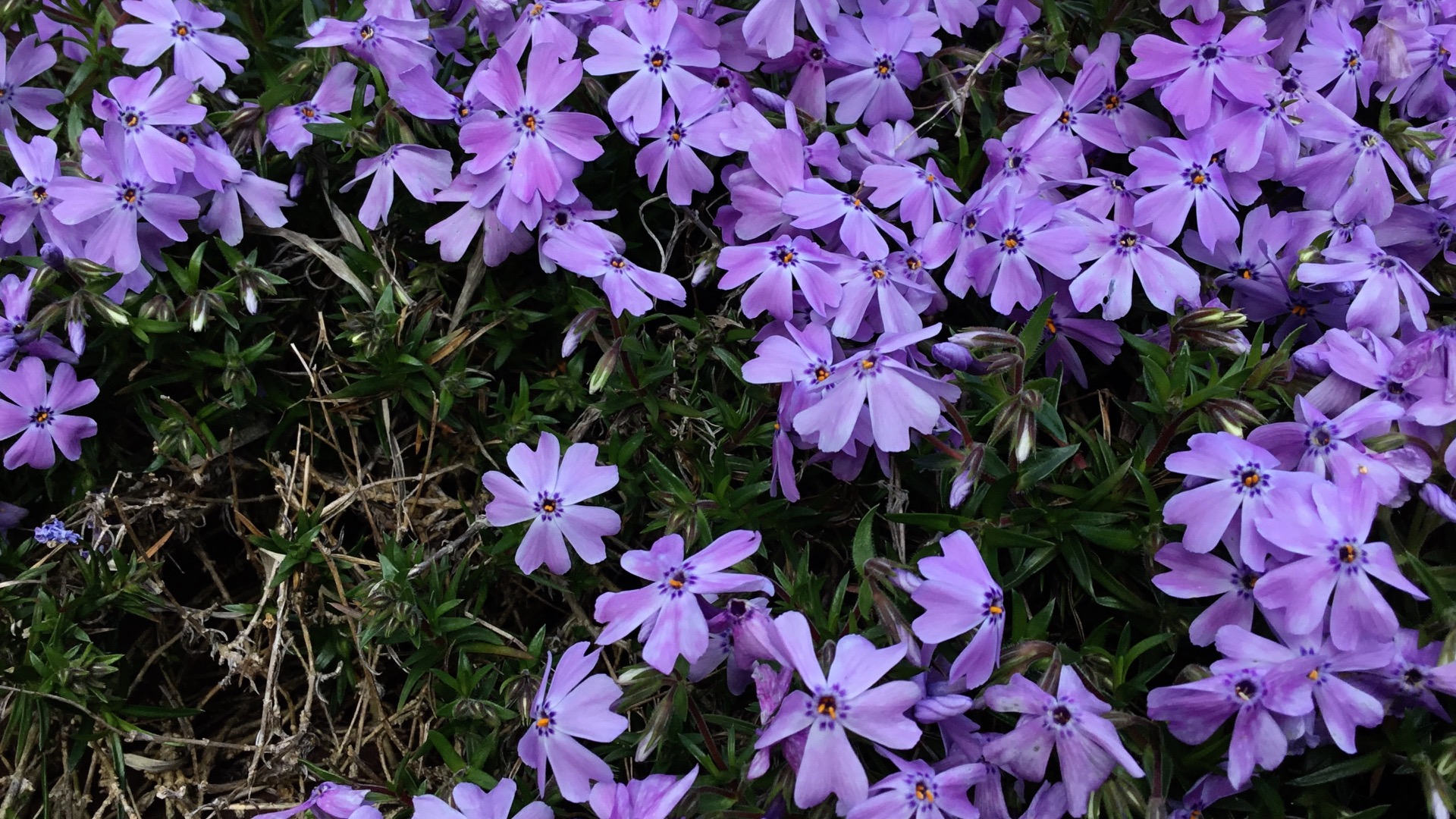 If you’re coming from anything prior to the iPad Air 2, then you’ll appreciate the fact that the 2017 iPad includes Touch ID. A must have feature for security and ease of use, Touch ID allows you to unlock your iPad, unlock features in supporting apps, wield Apple Pay, and make App Store purchases all with your fingerprint. Having Touch ID adds a considerable amount of value to an iPad, and those who adopt the $329 tablet will no doubt grow to appreciate it as a feature. 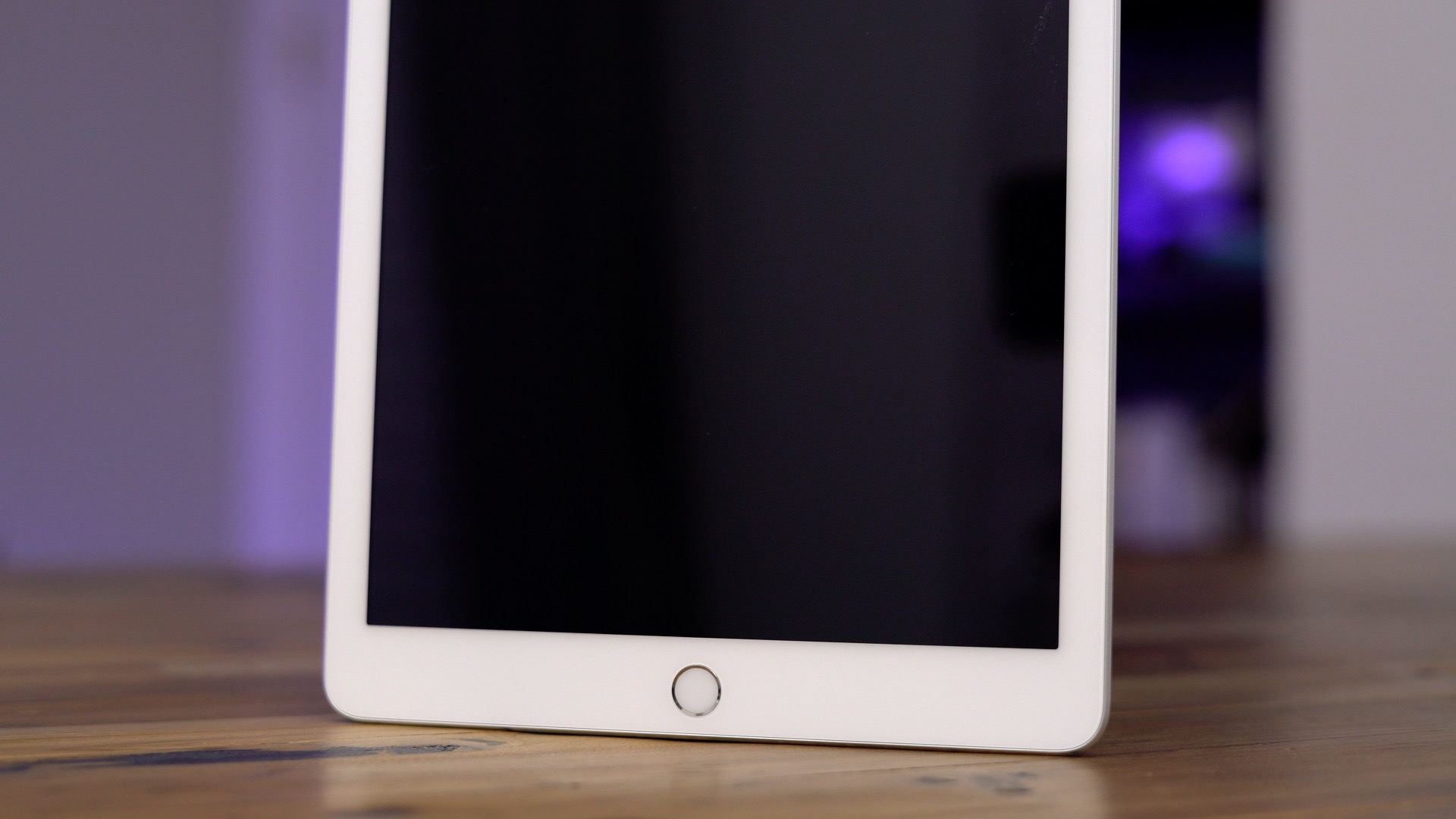 Finally, 16GB SKUs are a thing of the past. The entry-level iPad now comes with a manageable 32GB of storage space, which should prove to be enough for average use. Where 16GB was barely enough to be usable, 32GB lends users enough headroom to feel comfortable downloading apps and storing media on iOS. Of course, 128 GB would be even better, but it’s only $100 away instead of $200 away like in times past.

The 2017 iPad isn’t geared towards the early adopters and those looking for the absolute latest and greatest. Rather, it’s strategically priced to be appealing to first time iPad owners, and iPad owners steeped in the past who still use the pre-Air 2 hardware. For those people, the new iPad is a very compelling device that brings a lot of value to the table for not a lot of money. 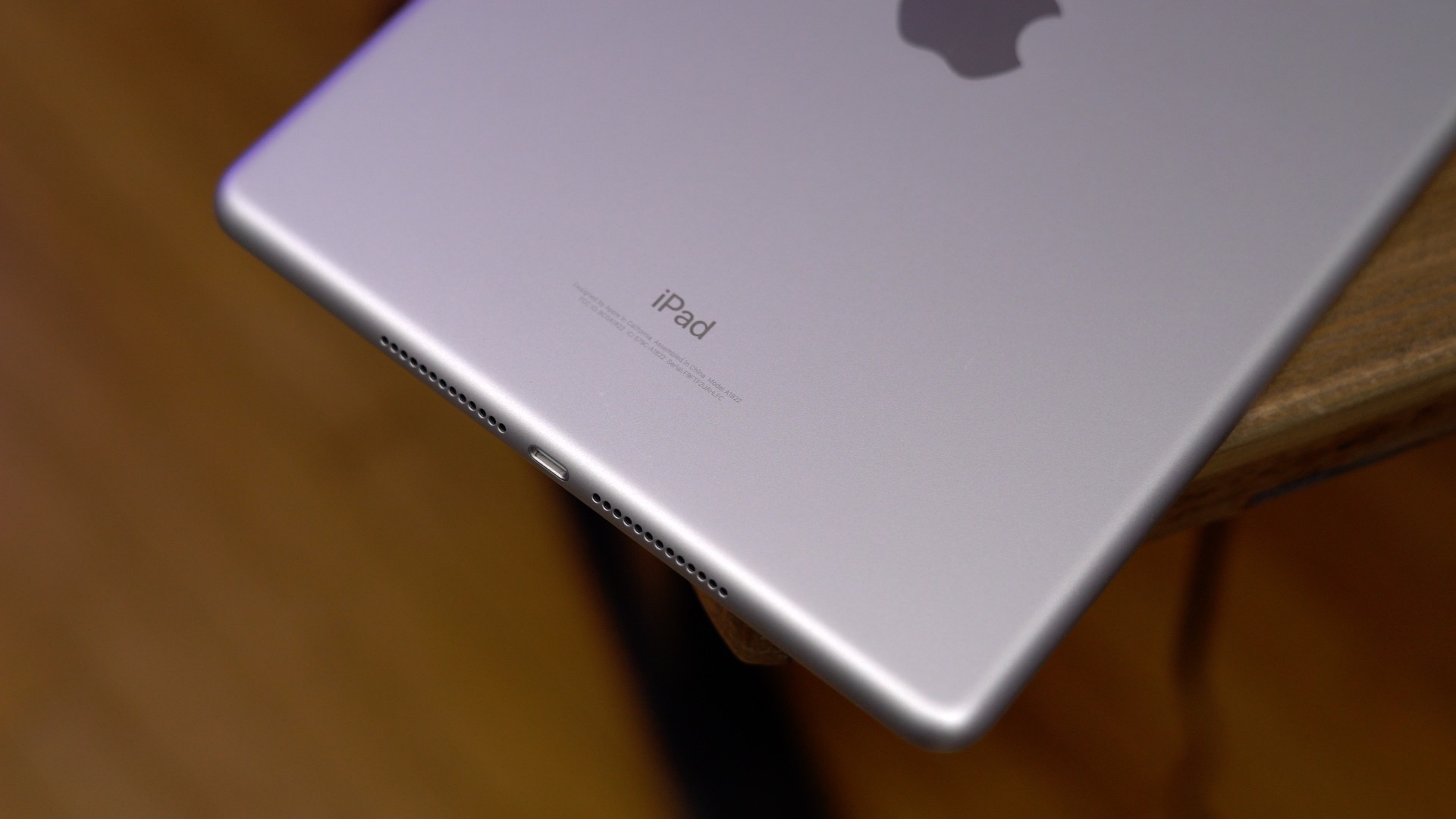 I could also see the iPad being a hit in the education sector, especially when factoring in education discounts. Coupled with the new Classroom 2.0 app, the 2017 iPad could prove to be difficult to pass up for school districts.

Make no mistake, Apple did cut corners in order to make the iPad more competitive at the low-end of the market, but it cut corners in areas that allow the hardware to flourish as a functional device for years to come. Instead of gimping the hardware with an inadequate processor, or not enough memory, Apple scaled back in areas where those who aren’t as tech savvy may not notice. 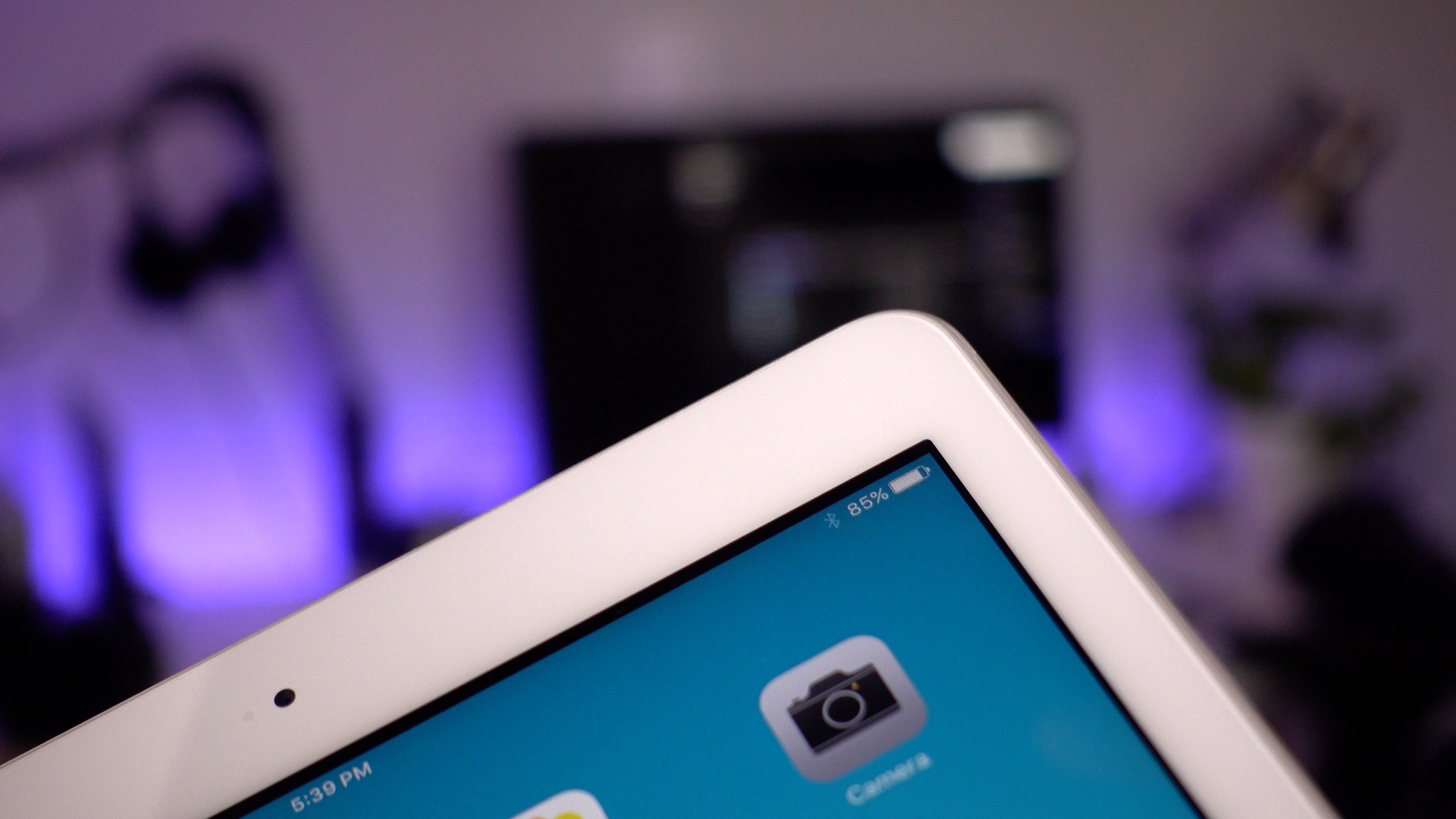 The air gap between the glass and display

While the lack of a laminated digitizer and antiglare properties is enough to bother someone who is used to the iPad Air 2 and newer hardware, such things mean little to those who aren’t fully engrossed in the Apple hardware ecosystem. 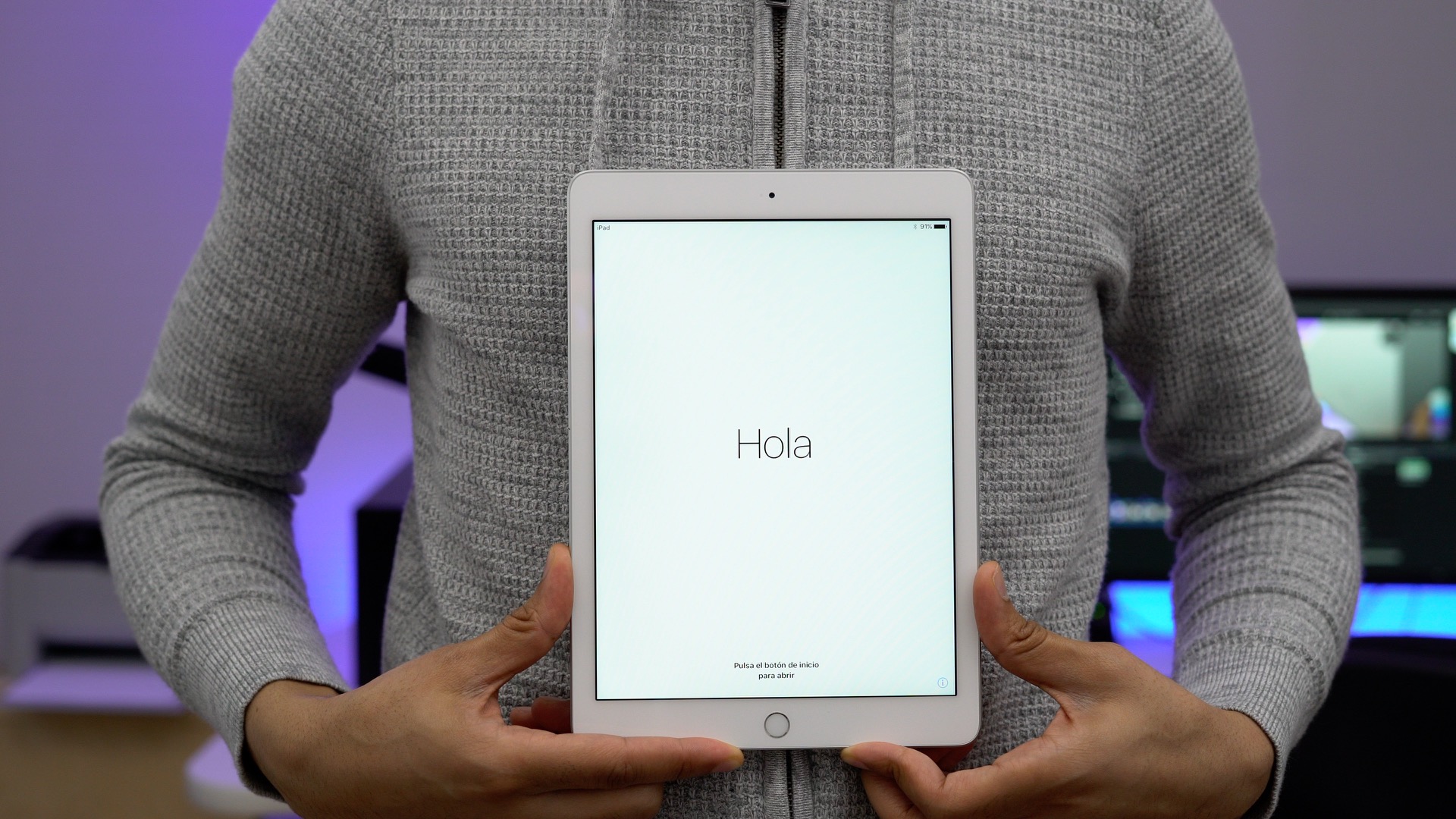 I think that the 2017 iPad is a very smart release. It stands the chance to capture a new audience who may have balked at a higher price, and serves as a tempting upgrade for iPad users on legacy hardware. And if you do happen to care about a better screen, or better cameras, you’re naturally pushed up market to the more expensive iPad Pro.

If you’re willing to wait a few days, you can find the new 2017 iPad for pre-order on B&H. By going that route, you get a small discount, free shipping, and no tax in most cases. Units are scheduled to be available on April, 4.

What are your thoughts on the new 2017 iPad? Would you consider buying one?