Hands-on with Apple TV 4K and the new Siri Remote

Bring on the 4K HDR movie binge watching. The new Apple TV 4K is out today and we’ve got our hands on Apple’s new streaming box.

The reviews call it the best TV box on the market, but note its premium price means it’s not for everyone. Apple still offers the two-year old 1080p version for its same $149 price, and $30 more gets you a faster processor with 4K HDR support.

Apple also upgraded movies purchases for free on iTunes from 1080p to 4K HDR for titles with UHD versions available from most studios (except Disney). For me that means 13 4K movies available on iTunes at no additional charge, and iTunes has a decent collection of 4K HDR titles available to rent or purchase for the same price as HD. 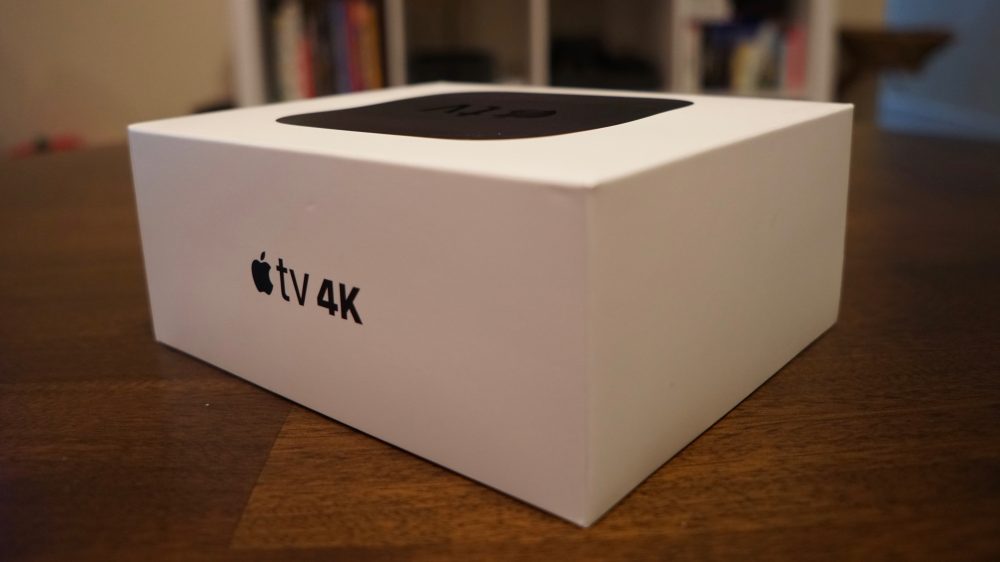 Between the 4K content on iTunes and the growing catalog of quality originals available in 4K on Netflix, I decided I had enough 4K content to upgrade my TV to a 4K HDR LG OLED (9to5Toys has great recommendations too) and purchase the new Apple TV 4K after briefly thinking I could resist.

While my display quality has vastly improved, the box itself is mostly unchanged visually.

There are a few subtle differences between the fourth-gen and 4K box starting with the top font: 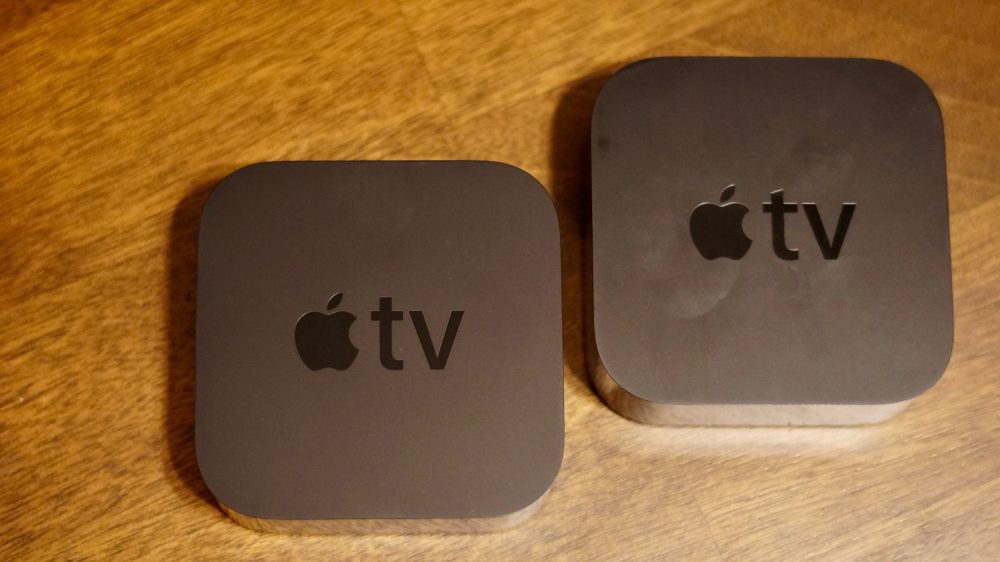 And the 4K version has a new ventilation system along the bottom as well (word is no fan so we’ll see what the teardowns reveal). 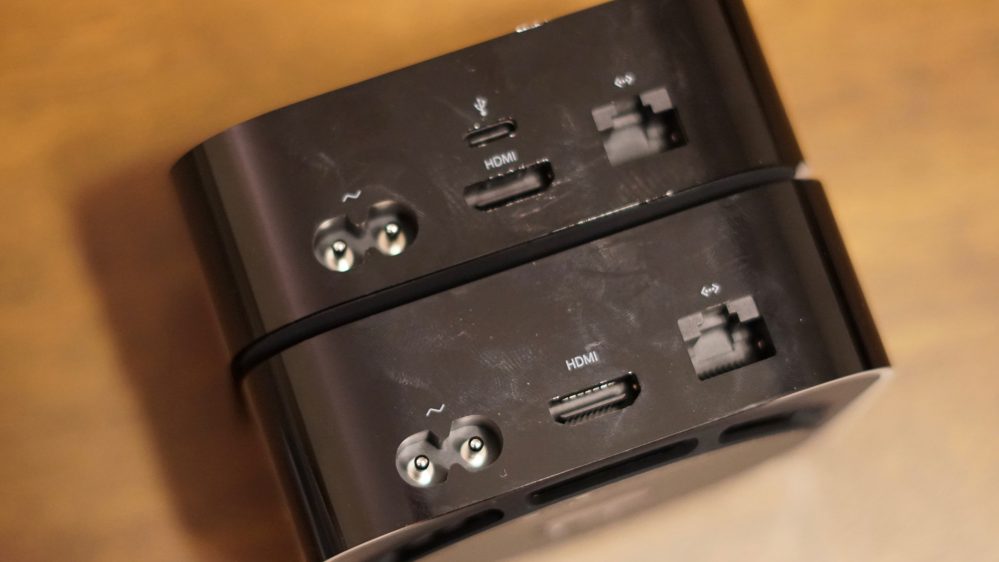 Apple has also updated the Siri Remote with a raised, white ring around the menu button. The idea is that the white ring is easier to identify in the dark and the feel should help with orientation, but it’s such a small change that I don’t expect ergonomics to be any different. 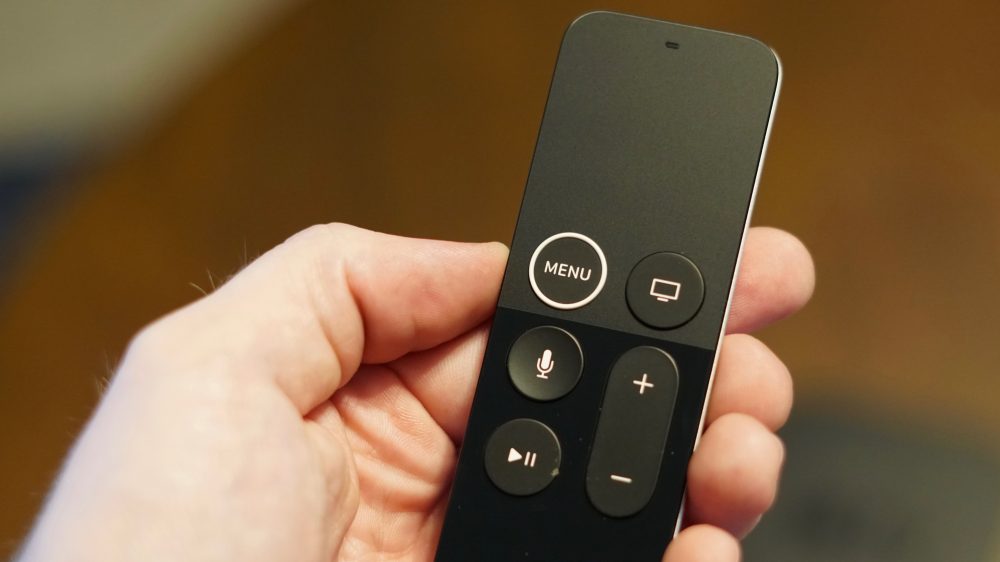 It does help with keeping up with which Siri Remote is the old one and which one is the new one when upgrading. You can also buy the updated Siri Remote for $59 on its own (down from $79).

802.11ac Wi‑Fi with MIMO (which used to be the fastest connection for Apple TV) now supports simultaneous dual bands (2.4GHz and 5GHz).

And the 10/100BASE-T Ethernet port on the fourth-gen Apple TV has also been upgraded to Gigabit Ethernet on the Apple TV 4K. Ideal for streaming 4K titles since wired networking outperforms wireless.

Other under-the-hood changes include a jump from Bluetooth 4.0 to Bluetooth 5.0, HDMI 1.4 to HDMI 2.o, the A8 chip to the A10X Fusion chip which drives 4K and HDR10/Dolby Vision support.

After upgrading your TV and Apple TV, you’ll probably need to buy a new HDMI cable too (I’m really glad the iTunes movie upgrades were free). During set up, tvOS will offer to try Dolby Vision for the best video quality by testing your HDMI cable. 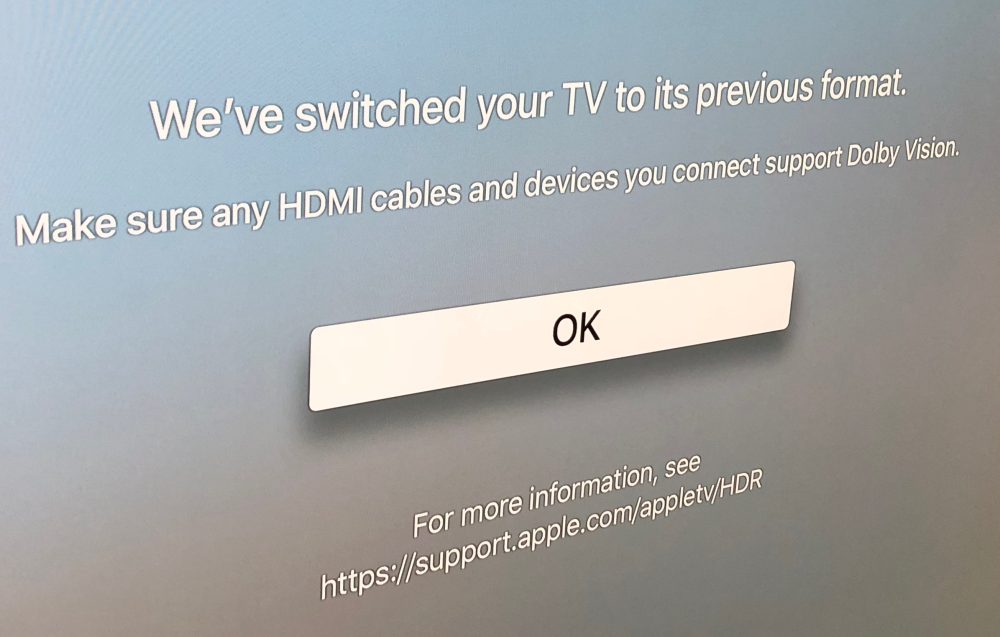 This test failed on my Apple TV 4K before I remembered to swap the old HDMI cable out for the faster one Apple recommended when buying Apple TV 4K.

Running the same test with the new HDMI cable did the trick. Aside from the HDMI advice, upgraders should make sure the recent tvOS 11 software update is installed on the fourth-gen Apple TV before switching to the new box.

There’s a new Home Screen Sync feature that remembers which apps you have downloaded and where they’re located. This makes upgrading easier than starting fresh, although you still need to enter passwords for apps. Using this feature, my new Apple TV 4K populated with the same apps in the same order on my new box as my old box. Not quite a full backup and restore but it helps a lot.

Aside from 4K and the speed boost, I’m a little disappointed the faster chip hasn’t enable other new features like picture-in-picture on the Apple TV 4K, but it’s possible we’ll see new features unlocked in future software updates to the new box. tvOS apps will also need to update for 4K.

I’ve already noticed Netflix doesn’t make it as easy to discover 4K titles on Apple TV 4K as it does the webOS app built in to my TV. You can see which titles are in 4K from the description on each listing, but there’s no 4K collection yet. YouTube will be a holdout due to a formatting debate with Apple unfortunately.

But if you’re like me and you’ve invested in iTunes for your movie catalog, the Apple TV 4K is probably worth upgrading to if you can swing the box and TV expense.