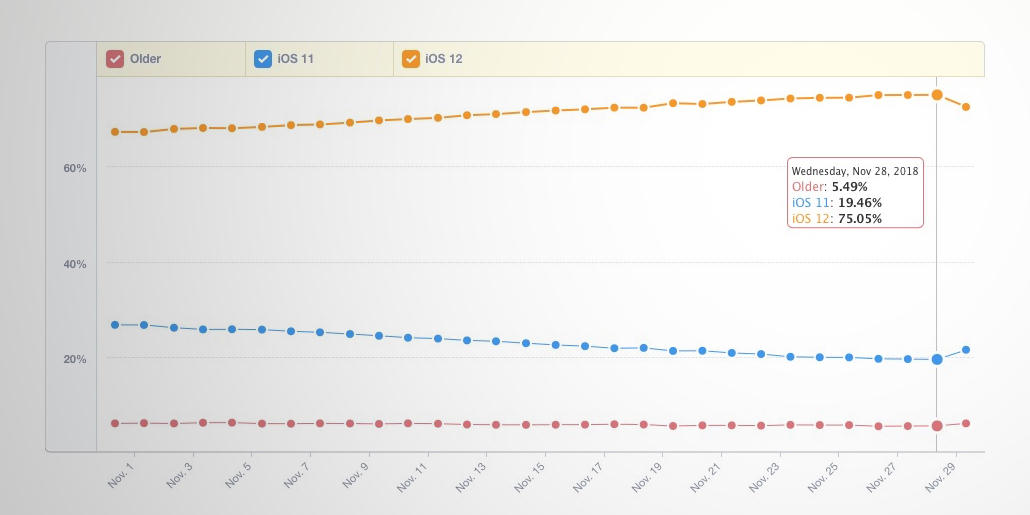 Mixpanel data comes from analytics frameworks inside apps and mobile websites, logging the OS version for iPhone, iPad and iPod touch devices it sees in the wild …

Both Mixpanel’s data and Apple’s official charts show that iOS 12 adoption is happening at a faster rate than iOS 11, but both vary a bit on the nominal percentage figures.

For its part, Apple said that iOS 12 crossed the 50% mark on October 10th. As of October 29, it reported that 60% of all devices are using iOS 12. When it next updates its chart, it should be comfortably above the 70% mark.

iOS 11 was widely seen as a fumble in software quality, which led to Apple making performance a key focus of iOS 12. The strategy certainly seems to have paid off, with many customers reporting that their ‘old’ phones (especially devices like iPhone 5s and 6 Plus) have been given a fresh breath of life. There also have not been any major showstopper bugs associated with the iOS 12 launch. (Almost exactly a year ago, Apple had to rush out iOS 11.2 to address a date bug that was causing iPhones to enter boot loops repeatedly.)

Apple also executed better on shipping promised features this year. iOS 11 saw many key features delayed to future updates, like AirPlay 2 and Messages in iCloud not shipping until one week before iOS 12 was announced at WWDC. With iOS 12, Group FaceTime was missing from the 12.0 but it was released in the very next update, iOS 12.1.

The only announced software feature currently outstanding is the ECG app for Apple Watch, which we expect will ship alongside watchOS 5.1.2 — likely launching next week. iOS 12.1.1 should also ship next week and includes the return of Live Photos in FaceTime and should enable AT&T and Verizon to resume provisioning Dual-SIM and eSIM plans.