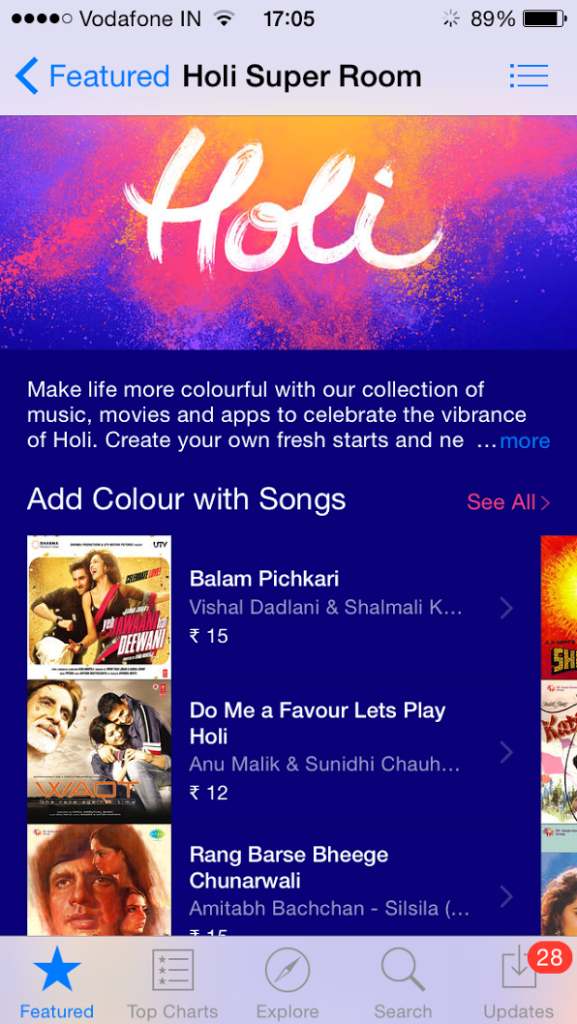 Apple on Friday added ‘Holi’, an Indian festival of colours, as one of the featured tabs alongside the new ‘Shot with iPhone 6’ tab. The featured tab takes the user to a whole new section of content related to the festival and colours. The content varies from songs related to the festival, which include the famous ‘Balama Pichkari’, to the new Indian movies that are based on or incorporate different Indian Festivals, although the list also includes other major titles. The seasonal section, called as ‘Holi Super Room’ also features different apps related to colours, which exist in huge numbers on the Appstore already.

You can have a look at the screenshots here and here.

An interesting app, iHoli, which has made to Apple’s this seasonal section, claims to let the user play holi on the phone, after the user clicks a photo, they need to add colours wherever they want and then share it on social media. An important mention also goes to the separate sub-section Apple has added, that has all the Hindi retro hits consisting of Amitabh Bachan’s and other famous Bollywood actors’s movies. This inclusion of the featured section comes amid Apple’s growing interest in India, after its announcement to double its iPhone sales, coming soon after the iPhone 6 did really well in the Indian Market. Speaking about India, Apple had previously also announced its plan to open 1,500 retail outlets through its ‘Apple Authorised Reseller Program’ in India, after talking to its regional distributors Redington India and Ingram Micro.