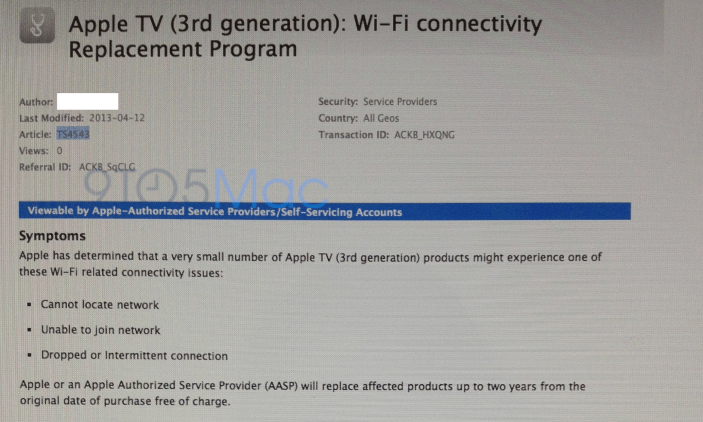 Apple has informed its official retail stores, AppleCare employees, and authorized resellers that a small number of third-generation Apple TV units have WiFi issues. These issues surround not being able to locate a WiFi network, unable to join a network, and dropped or intermittent connections.

If an Apple technician determines that an applicable Apple TV has these issues, the unit can be replaced as part of a replacement program that Apple has begun because of these WiFi issues. Apple says that replacements can be offered free of charge up to two years after the device’s purchase date.

Here are the serial number pairs that are eligible:

Earlier this year, Apple silently began shipping a tweaked version of its third-generation Apple TV. This new model, as revealed in FCC filings, features new Broadcom wireless chips. It is plausible, we speculate, that the change in WiFi parts could have been in response to these WiFi issues in some third-generation models.