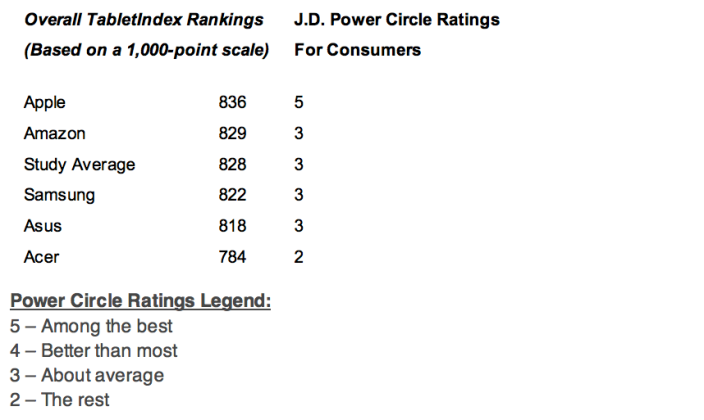 The iPad was rated by consumers as the best tablet for the second time running in the JD Power customer satisfaction survey, with no competitor tablet rated above About average. Back in March, the iPhone was rated best phone for the 9th consecutive time, a fact Apple includes prominently on its Why iPhone webpage.

Tablet owners were asked to give an overall satisfaction rating, as well as rank their tablet on five specific factors, each given a weighting from most to least important …

The iPad was the only tablet to be categorised as ‘among the best’, suggesting that JD Power may want to slightly rethink the description of the overall ranking categories … Overall, the iPad scored 836/1000, beating tablets by Amazon, Samsung, Asus and Acer.

Unsurprisingly, the study found that 51% of tablet owners share usage with at least one other person, with satisfaction increasing as more people shared the device. It’s of course common for iPads to be used by both partners and children.