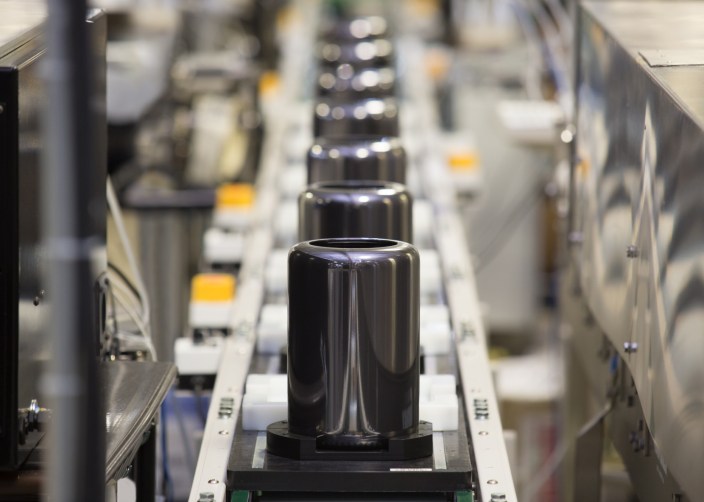 After three years without a substantial update and several months of teasing and promoting, Apple has finally announced that tomorrow it will begin selling the newly designed and more powerful Mac Pro it first showed off at WWDC back in June. (Full press release below.)

We have begun manufacturing the Mac Pro in Austin. It’s the most powerful Mac ever. Orders start tomorrow. pic.twitter.com/Jrd1Gic3Ya

The road was certainly not rapid between update cycles with two years of nary a word on whether or not the Mac Pro line had any life left in it and a full year of teasing and promoting the 2013 model being released tomorrow. Let’s take a look at the Mac Pro saga that led to today’s debut…

Tim Cook offered the first tease of the Mac Pro way back in December 2012 during an appearance on NBC’s now-cancelled Rock Center with Brian Williams. Apple’s CEO described the company’s investment in bringing production of what we would later learn to be the new Mac Pro into the United States:

“Next year we are going to bring some production to the U.S. on the Mac. We’ve been working on this for a long time, and we were getting closer to it. It will happen in 2013. We’re really proud of it. We could have quickly maybe done just assembly, but it’s broader because we wanted to do something more substantial. So we’ll literally invest over $100 million. This doesn’t mean that Apple will do it ourselves, but we’ll be working with people, and we’ll be investing our money.”

Months later in May, Mr. Cook described the unreleased American-assembled Mac line during an unrelated Senate hearing as being built in Texas with components and equipment sourced from Illinois, Florida, Kentucky, and Michigan.

It was June 10th during WWDC that Apple surprised us all with its theatric reveal of the professional desktop line with a Hollywood-style trailer showcasing the 2013 Mac Pro.

SVP of Marketing Phil Schiller revealed the all new design of the Mac Pro as well as other details like 4K display support and Thunderbolt 2. Schiller famously followed up the trailer presentation by teasingly saying “Apple can’t innovate, my ass.” What Schiller did not express at the time was pricing and availability short of later this year.

Fast forward to October 22 during Apple’s Fall Event for the iPad Air and iPad mini with Retina display. Here the company revealed the professional desktop’s $2,999 and $3,999 price tag for quad-core and 6-core base models, respectively. However, the company did not reveal the 2013 Mac Pro launch date, opting instead to simply commit to a vague December launch.

A Jony Ive and Marc Newson designed (PRODUCT)RED 2013 Mac Pro was listed and sold at auction for $977,000 between October and November (and once believed to be purchased by Tony, Fadell, former head of Apple’s iPod division and Nest founder and CEO).

Now the real excitement unfolds with the all new Mac Pro shipping to the handful of Mac fans and professionals lucky enough to pick one up. 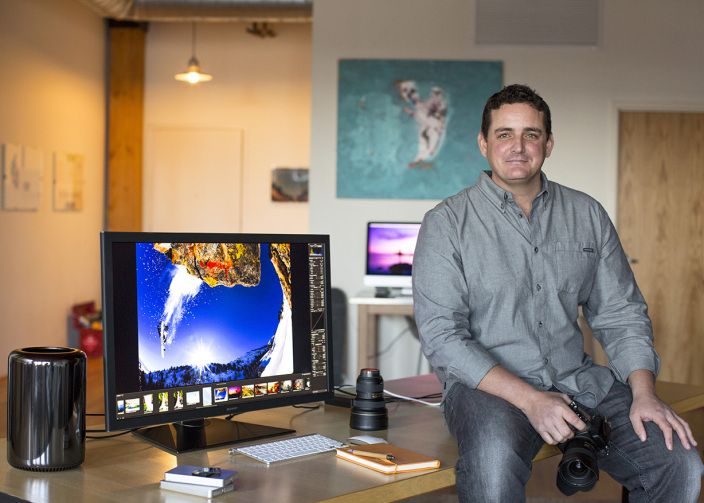 Our own Jordan Kahn interviewed extreme sports photographer Luca Gilman (pictured above) who was included in among select few professionals Apple chose to test drive the 2013 Mac Pro ahead of its December debut.

Expect more great stories like Gilman’s to come as the brand new Mac Pro finally enters the market for the first tomorrow.

Designed around an innovative unified thermal core, the all-new Mac Pro packs unprecedented performance into an aluminum enclosure that is just 9.9-inches tall and one-eighth the volume of the previous generation. Mac Pro features 4-core, 6-core, 8-core or 12-core Intel Xeon processors running at Turbo Boost speeds up to 3.9 GHz and two workstation-class AMD FirePro GPUs that deliver up to eight times the graphics performance of the previous generation Mac Pro.* PCIe-based flash storage delivers sequential read speeds up to 10 times faster than conventional desktop hard drives, and ECC DDR3 gives the new Mac Pro up to 60GBps of memory bandwidth for seamlessly editing full-resolution 4K video while simultaneously rendering effects in the background. With an incredible six Thunderbolt 2 ports, each with up to 20Gbps of bandwidth per device, the new Mac Pro completely redefines desktop expandability with support for up to 36 high-performance peripherals, including the latest 4K displays.