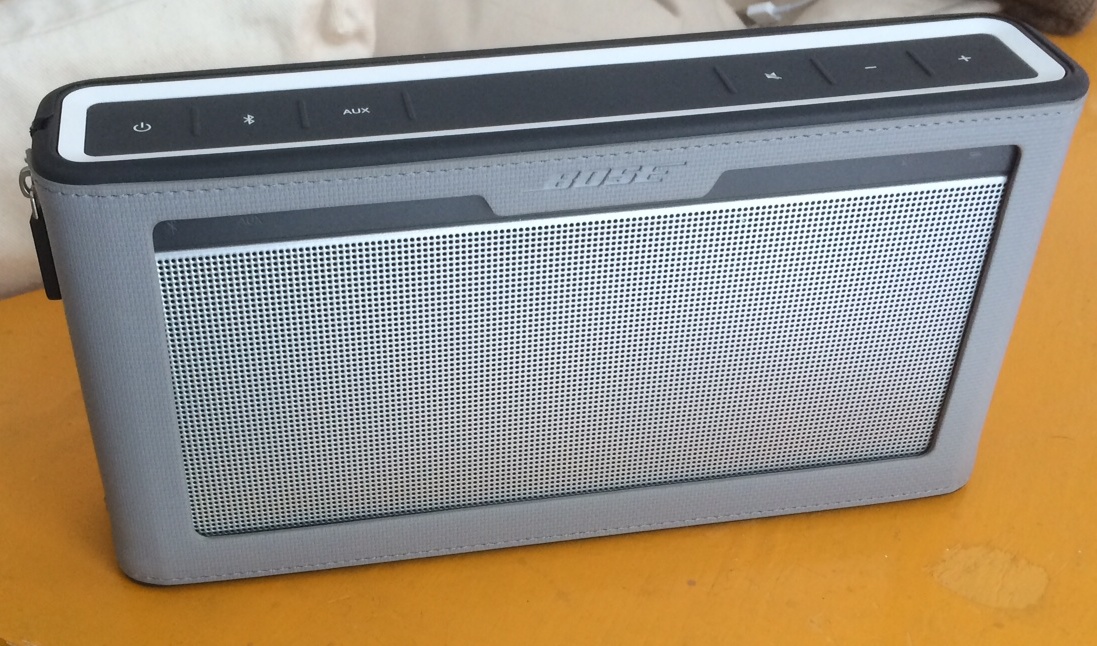 I was a huge gushing fan of the Bose Soundlink Mini when I reviewed it this summer, calling it the “Best Sounding portable Bluetooth speaker ever”. For $199 you’d get bookshelf type of power and clarity with 6 hour battery in a portable package that you could throw in a coat pocket, bag, or purse.

This week, Bose started shipping a bigger version, the $299 Soundlink 3 which is officially the successor to the Soundlink 2 but it grabs a lot more technology, features and appearance from the very successful Mini.  The big bro ‘III’ boasts an impressive 14-hour battery, 6 Bluetooth device memory, and doubles the Mini with four drivers and two passive radiators. In the process it doubles in size to a 3-pound package that isn’t nearly as portable as the Mini at 5 inches high, 10 inches wide, and 2 inches deep.

But does that $100 and double size give you appreciably better sound?

The short answer is yes. This has a better sound and volume than the Soundlink Mini, giving it the title of ‘Best Sounding Portable Bluetooth Speaker’ in my book. How much better the sound is, however, is debatable. Bose tends to artificially boost the bass in music and doesn’t quite compensate in the midrange areas (highs are good). For most stuff this sounds great but people can argue forever on their respective tastes. I found it also sounded much better in front of the wall so that the bass bounced off the back of the speaker into the room.

The Soundlink Mini gets really loud and easily fills a normal room with deep, clean music and is plenty loud for a small group of people to listen to outside on a bike, at a park, or on the beach. The Soundlink III goes one step further, filling a large room and possibly annoying the neighbors in the process.

The buttons and lights work mostly the same as the Mini and are relatively straightforward. On one side, you have volume and mute buttons. On the other, you have power, Bluetooth and AUX buttons.  These are real buttons with a deep push, not capacitative like cheaper products.

The product overall is solid. The speaker feels substantial because of the heavy magnets in those speakers inside and it has a polished metal grill on the outside that will go well with aluminum and stainless steel Apple products.

On the back you get a proprietary AC power adapter, a micro USB service entrance, and an AUX-in port for non-Bluetooth connectivity, again, very similar to the Mini. On the bottom you’ll see two brass prongs which seem to indicate a future dock connector but as of this writing none has been announced.

As I said in the Mini review, charging via Micro USB would have been much preferred, as dragging around the power adapter can be a … drag. Luckily, you don’t really need to charge this one that often…

Bose says you can get 14 hours of playback from a single charge. To test this, I listened to the Soundlink III for a few hours each day for a full week during a 9-day ski vacation on which I didn’t bring the charger. True to form, the Soundlink died on the 7th day – well on its way through 14 hours. A battery indicator is on the front but it doesn’t convey much information – compare to the Logitech App that comes with its UE Boom line that tells you exactly how much battery you have left.

The pictures I took above are with the $35 accessory covers which are available separately for $34.95 each. They add some personality and protection, but not much else. You can probably pass on these.

This is the best-sounding portable Bluetooth speaker I’ve heard but it isn’t appreciably better than the $100 cheaper Soundlink Mini and it is significantly less portable. Moreover, Bose didn’t fix any of the gripes I had with the Soundlink Mini:

For most people, I’d still recommend the $199 Soundlink Mini. It sounds as good 95% of the time and it is cheaper and smaller. For me, I almost never needed the extra volume or battery life that the Soundlink III included. Still, I know some will appreciate those features.

For those who don’t like the downsides above, check out the Ultimate Ears Boom and Mini Boom which offer sound almost as good as Bose but add Micro USB charging, the ability to use it as a speakerphone, and better pairing/app/experience. For a full review of the portable Bluetooth Speaker landscape check out our mega-review.

The new SoundLink Bluetooth speaker III is available now from Bose for $299, at select authorized Bose dealers, and on Amazon.com.