All Apple websites could be blocked in Belgium over AppleCare controversy

A Belgian judge is reportedly considering ordering local ISPs to block access to all Apple websites in the country in response to a long-running dispute over the company’s promotion of AppleCare warranties, according to local newspapers cited by Tech.eu.

A case brought by the consumer protection group FPS Economy argued that Apple misleads consumers by claiming a standard warranty of one year, and selling an optional AppleCare extension, when EU law means that manufacturers are legally obliged to offer a minimum warranty of two years as standard …

The judge is said to be hesitating over this rather extreme proposal after it was pointed out the problems that would be caused for Apple customers in Belgium if they were unable to access Apple servers for services like iCloud and iTunes.

Apple previously hit similar troubles in Italy, resulting in AppleCare being withdrawn and total fines of almost $1.5M being levied. The case was settled when Apple changed its warranty pages on its websites across EU countries with a new table showing the different forms of warranty coverage available. 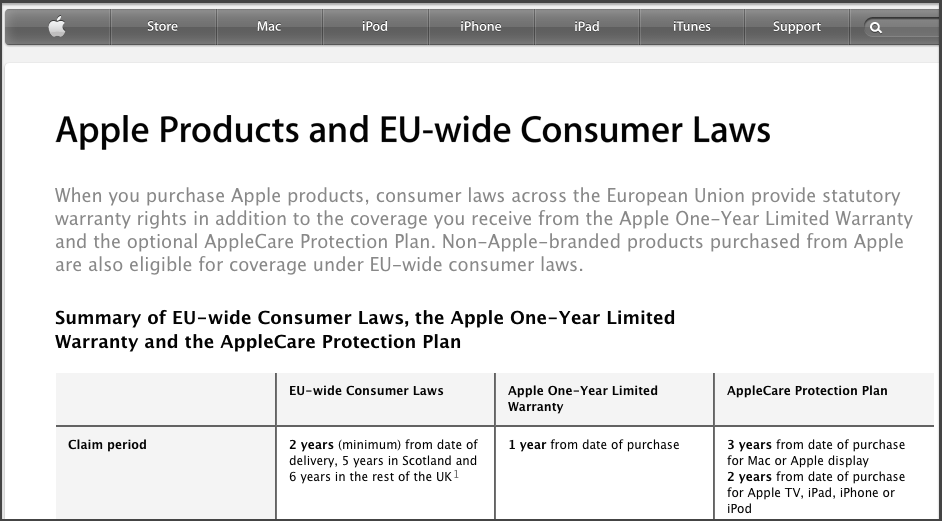 EU law provides protection against faults which were present at the time of sale. However, any fault occurring within two years (or more, in some countries) is presumed to have been present when sold unless the retailer can prove otherwise.

Consumer groups in ten further EU countries launched cases requiring Apple to do more to advise consumers of their legal rights before selling them AppleCare. The Belgian case is one of these, with FPS Economy arguing that the change to the website was an inadequate response.

Apple also increased its Australian warranties from one year to two years after facing similar pressures there.