Opinion: Is iBooks really gaining ground on Kindle, or do iBooks sales lag behind users? 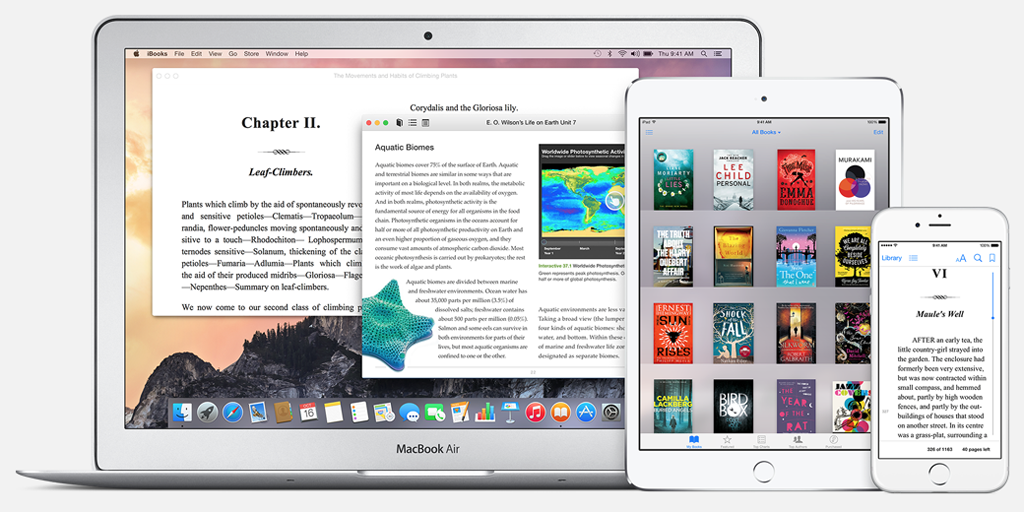 I love the Apple ecosystem. It’s not perfect, and the gap between it and the Google alternative isn’t as great as it used to be, but to my mind it’s still by far the best solution for anyone looking to have all their data and content available across both desktop and mobile devices.

But there’s one notable gap in my own use of the Apple system: books. Despite the fact that my iPad is my primary ebook reader, I still use the Kindle app and buy my books from Amazon rather than Apple …

That’s largely historical accident. As a very early adopter of ebooks (who’d have thunk it?), I bought the very first Kindle and it was love at first sight. For someone who loves to read, and typically has more than one book on the go at any given time, the ability to carry hundreds of books around with me wherever I went – and in a device so small and light I scarcely noticed its presence in a bag – was a dream.

As soon as I started carrying an iPad everywhere with me, it seemed silly to carry two tablet-style devices, so at that point I switched to using my iPad as my ebook reader. But with hundreds of books in the Kindle format, and no reason to convert them, I stuck with Amazon for my purchases.

I’m far from alone in this, of course: Kindle remains the dominant ebook platform. But to see some of the numbers that have been floating around over the past year or so, you might think it’s only a matter of time before iBooks overtakes Kindle.

A UK study found that 50% of ebook readers used Kindle while 31% used iBooks. A US study last summer suggested that in the 18-24 age-range, iBooks was now just 2% behind Kindle. In January, Apple’s iBooks head Keith Moerer said that the store had averaged a million new customers a week since the launch of iOS 8 and Yosemite.

As a reader, I’d idly wondered whether iBooks really could be gaining ground at such a rapid pace. My circle of friends includes a lot of avid readers, and a lot of iDevice owners too, yet almost everyone I know buys from Amazon rather than Apple.

But publishing my own technothriller novels (11/9 and The Billion Dollar Heist – thanks for asking) was the first time when my skepticism seemed to be backed by some hard data. Both books were available on Amazon, iBooks, Nook and Kobo – and sales data allow me to see exactly where my sales are coming from. The results were interesting, to say the least:

Given that I write a lot about Apple, and most of my Twitter followers probably discovered me through a link to an article on 9to5Mac, it’s a pretty safe bet that my readers and followers comprise a higher than average proportion of Apple owners. So I have to think that 7% is higher than for the average author out there.

So, both my anecdotal experience of friends, and some hard sales data for a couple of novels, suggests that iBooks is a lot further behind Kindle than some of the more general numbers might suggest. How to explain this?

I think the answer may be in the fact that users, customers and sales may be three very different things. iBooks now comes installed as standard on Macs, iPhones and iPads. Anyone who ever opens up the app to read part of a single book may be counted as a ‘user.’ I also rather suspect that Apple’s ‘customer’ numbers include anyone who has downloaded a book from iBooks, free or paid.

But even if customers are people who have paid for books, if your average iBooks customer buys one book a year and your average Kindle customer buys 13 books a year, there’s your 7%/92% split. So my suspicion is that even if iBooks is doing ok on the user and customer front, Kindle is still probably well ahead on sales.

And a recent change to Amazon’s payment to authors for books borrowed by Prime and Kindle Unlimited members means that iBooks may be left even further behind. Amazon now pays authors per page read of the books members borrow. For longer books like mine, it looks likely that the revenue from lending – which requires ebooks to be exclusive to Amazon – would significantly outweigh the sales revenue from iBooks. Which was the reason I was studying the numbers in the first place: making the decision to pull my books from iBooks, Nook and Kobo.

Do you buy ebooks from iBooks, Kindle or elsewhere? Recognizing that some may buy from more than one source, please tick the one that represents the majority of your purchases, only going for the ‘Even split’ option if the split is close to 50/50. As always, let us know your thoughts in the comments.