On Monday, Adobe unveiled Photoshop CC for iPad, one of the most ambitious third-party software projects we’ve ever seen for iOS. With over 28 years of history on the Mac, moving to a new platform is no easy feat. Photoshop’s breadth of tools makes it essential to the workflows of many creative professionals. Even though it won’t ship until next year, there’s already considerable interest and numerous questions from curious iPad users and Photoshop fans about the upcoming app. 9to5Mac talked with Photoshop’s Senior Product Manager Jenny Lyell to learn more about Adobe’s goals for Photoshop on iPad and to clear up a few pressing questions.

Photoshop 1.0 for Mac OS was released in 1990, when most professionals were still creating work first for print. The tools customers expect today are dramatically different, yet Photoshop retains some of this legacy baggage thanks to its longevity. Adobe has repeatedly stressed that they aren’t bringing a watered-down version of Photoshop to the iPad. But does it make sense to migrate every feature from the desktop? I asked Lyell if Adobe will use the opportunity that a new platform provides to rethink some of Photoshop’s goals.

“We want to make sure that users look at this and they say, ‘this is Photoshop,’ but we also want to get rid of some of that history that barely anyone uses anymore so that it’s lighter weight and modern.”

Lyell prefers the term “real Photoshop” over “full Photoshop” when describing the software. The goal isn’t to clone the app for iOS, but to replicate the core experience.

Photoshop for iPad won’t be feature-complete on day one. Adobe wants to iterate on the app quickly, and that means pushing a release as soon as possible to begin collecting user feedback.

“We’re not going to make up 28 years of work in a year. It’s going to start with the core tools that enable you to do real work,” Lyell said. “In terms of the development, we are going to be releasing more iteratively and in a more agile way, in some sense, to catch up to desktop Photoshop.”

One of the features destined to migrate to the iPad is support for third-party paintbrushes. Adobe wants the brushes you already own to eventually sync right from the desktop. The Photoshop team is exploring support for actions, too, although its priority will be determined by customer demand. 3D features, largely redundant thanks to Dimension CC, may not make the cut.

I asked if the desktop and mobile versions of Photoshop will receive updates in lockstep after near-feature parity is reached, or if one platform will have an edge on the other. Due to the nature of Creative Cloud’s PSD syncing, users will rely on both applications to accurately and consistently display the same files.

Adobe is still sorting out how updates will be pushed, but the intention is to roll out key new features simultaneously on all platforms while iterating device-specific enhancements on a different schedule. 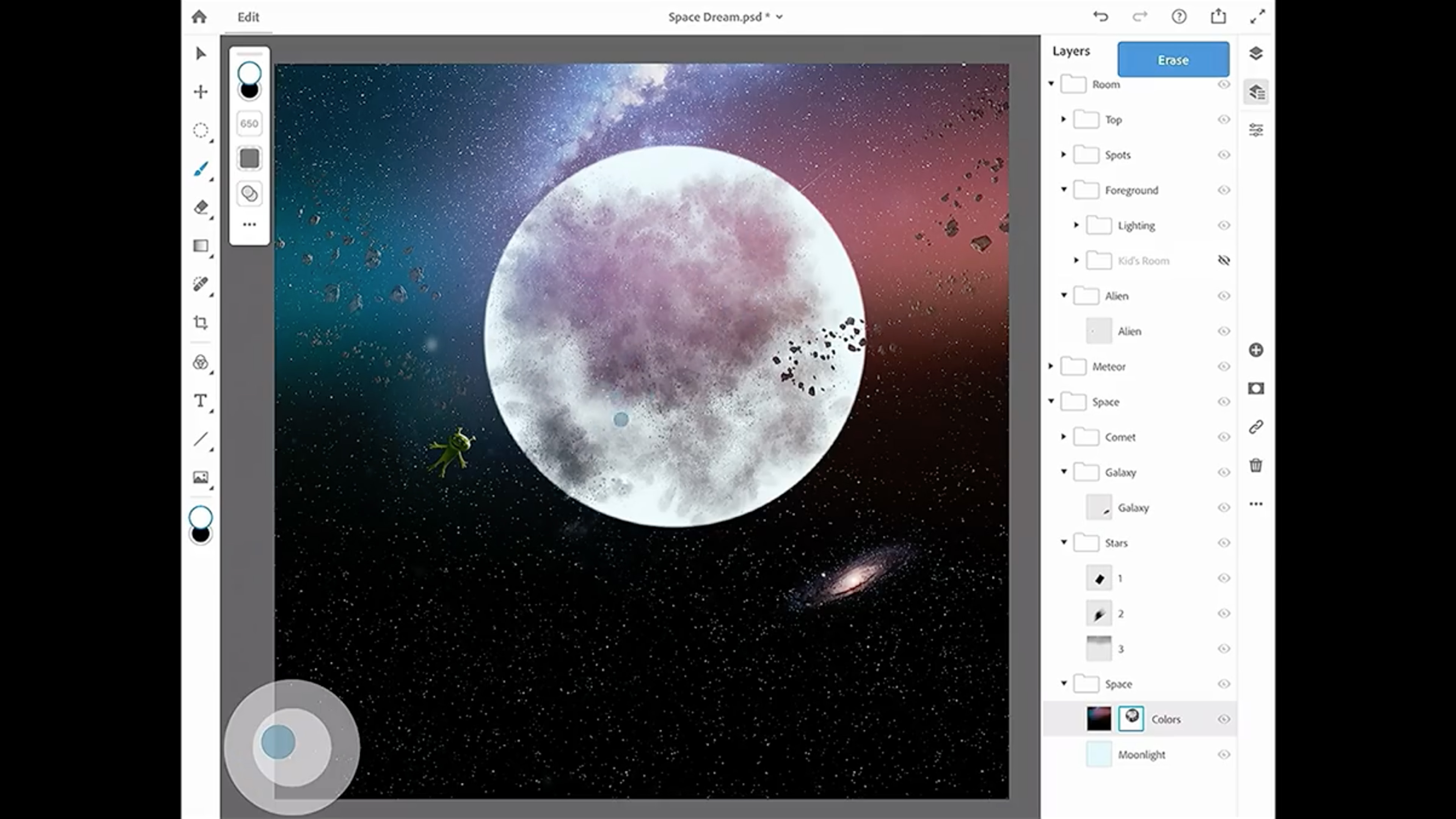 Device-specific features may include things like support for keyboard shortcuts. The initial release of Photoshop for iPad won’t offer the same keyboard support as the desktop, but Adobe promises it will return – in some form. The handheld nature of an iOS device requires a rethinking of common workflows that were once accelerated by the keyboard.

Without dropdown menus, commands are presented contextually on the iPad. In a demo, Lyell showed me how after the selection tool was used to highlight an area onscreen, a toolbar of common selection-based actions appeared at the bottom of the display.

The second part of the story is what Adobe calls the touch modifier. In its current state, the touch modifier is a small, semi-transparent circle in the corner of the display that acts a little bit like a virtual analog stick on a gaming controller. By pressing and holding the button or dragging it a certain direction, secondary actions become available. I like to think of it as a touch equivalent to right-click. Lyell says the Photoshop team is still experimenting with its functionality.

“We’re still testing what this final experience is, but right now it is toggling between different tools. We’re looking at customizing, we’re looking at all kinds of things. You can look at it as a touch accelerator as well.”

Today, the touch modifier is working in concert with the Apple Pencil to provide added utility. Pressing the button while drawing turns the Pencil into an eraser. Across the application, Apple Pencil support seems robust to the point that I wondered if it would be a requirement for Photoshop. Lyell says that users without a Pencil or who prefer to use their fingers for editing will have no problems using the app. 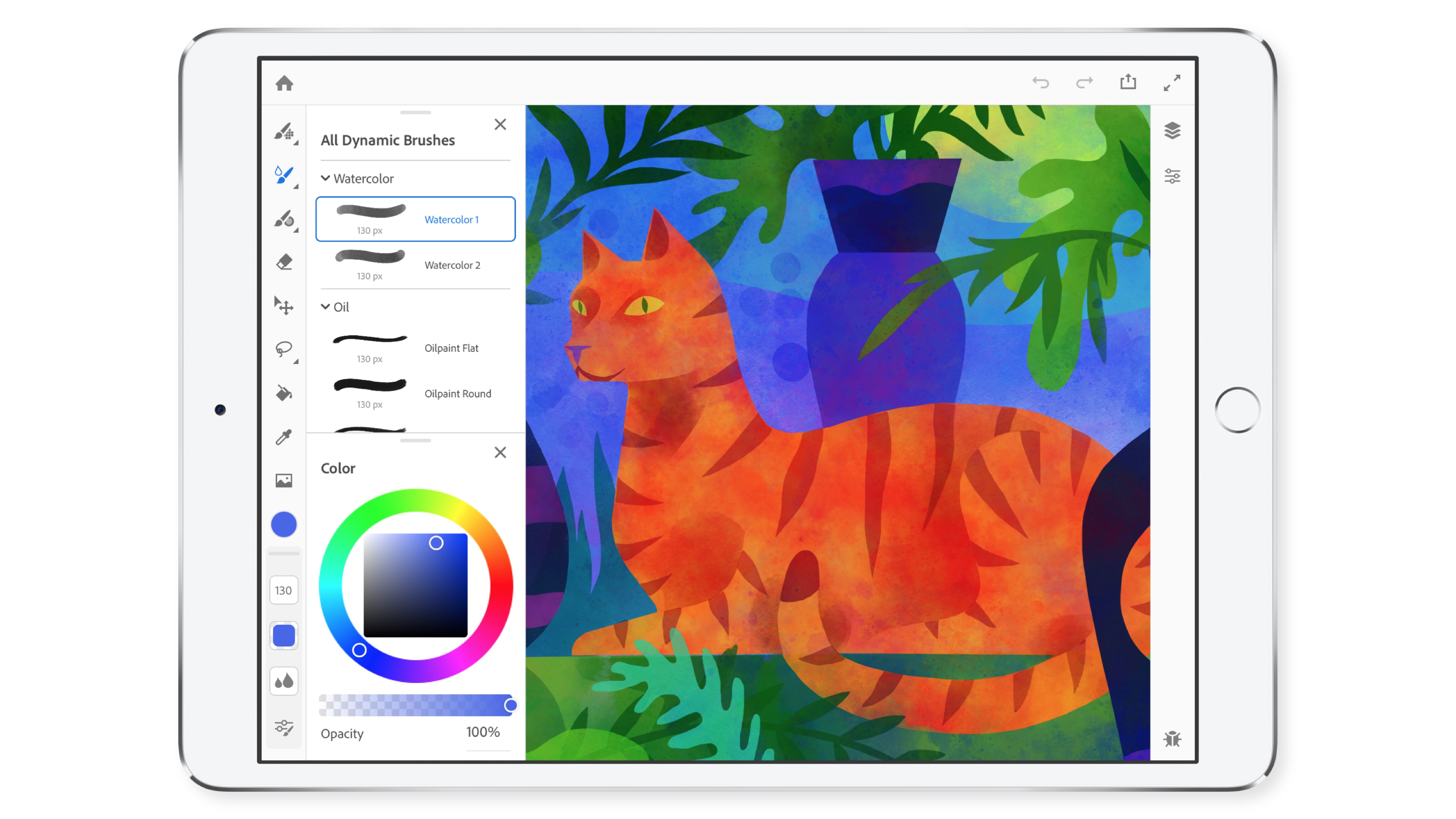 Apple Pencil support is also prominent in Project Gemini, a new iPad-first, multi-surface painting tool from Adobe that was unveiled alongside Photoshop this week. The app is promised to simulate brushes, paint types, and textures with an incredible level of fidelity. Photoshop has its own painting tools, but don’t expect the two apps to merge before release.

“If you think about Photoshop, it caters to a lot of segments,” Lyell said. “The tradeoff when you cater to a lot of segments is that you never specialize for a particular segment. When Lightroom spun off from Photoshop, it actually used the same photography engine. It was specialized for photographers. Adobe XD also spun off and tailored more to design. Illustration, drawing – that’s part of Photoshop – but the hope and the goal is that Gemini spins off and becomes super specialized.”

Similarly, Adobe currently has no plans to merge the desktop and mobile versions of Photoshop, although they have given thought to the idea. In June, Apple previewed a framework that will allow developers to bring UIKit applications from iOS to macOS. Given the fact that the iPad will run “real Photoshop,” I asked if the two platforms could eventually have identical codebases. According to Lyell, the change would be too disruptive to long-time users.

“You saw the uproar of claps when Command-Z changed. Every little change can have a huge impact, whether positive or negative. We want to focus on modernization [on the iPad], and the features that people like here, let’s gradually bring that back into Photoshop desktop. If we put too many changes in Photoshop desktop, that can be really disruptive for people’s day-to-day workflows. For the people who are mobile forward, who really want it on the iPad, they’ll be the first that pick this up.” 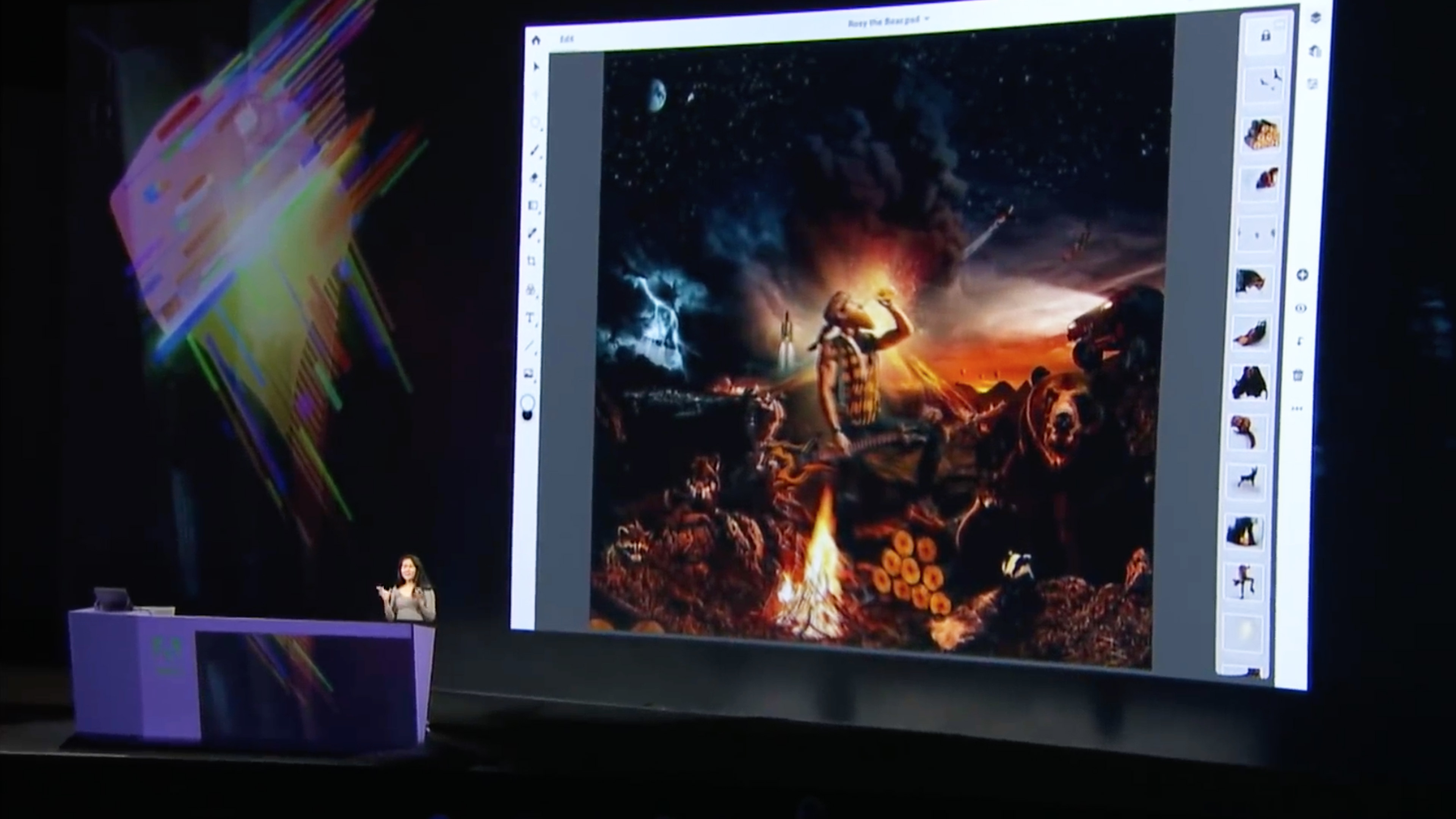 One of the ways Adobe is bridging the gap between platforms is by using a new file syncing method called Cloud PSDs to move data back and forth between devices in real time. While it might sound like a totally new file format, Adobe wants to assure users that existing Photoshop files will be compatible. Lyell offered some more detail on the technical implementation of syncing.

“When the file opens, nothing changes. You’re looking at the same exact thing. The ‘what’ stays the same. The ‘how’ is different. A regular sync would just read all of the pixels and sync the entire file. So if it’s a massive file, it takes a really long time. The Cloud PSD syncs only the differences that are unique. So if you have a document on both devices and you only made one change to one pixel, it scans the whole thing and says, ‘O.K., we’re going to update that pixel.’ We’re not introducing a new format.” 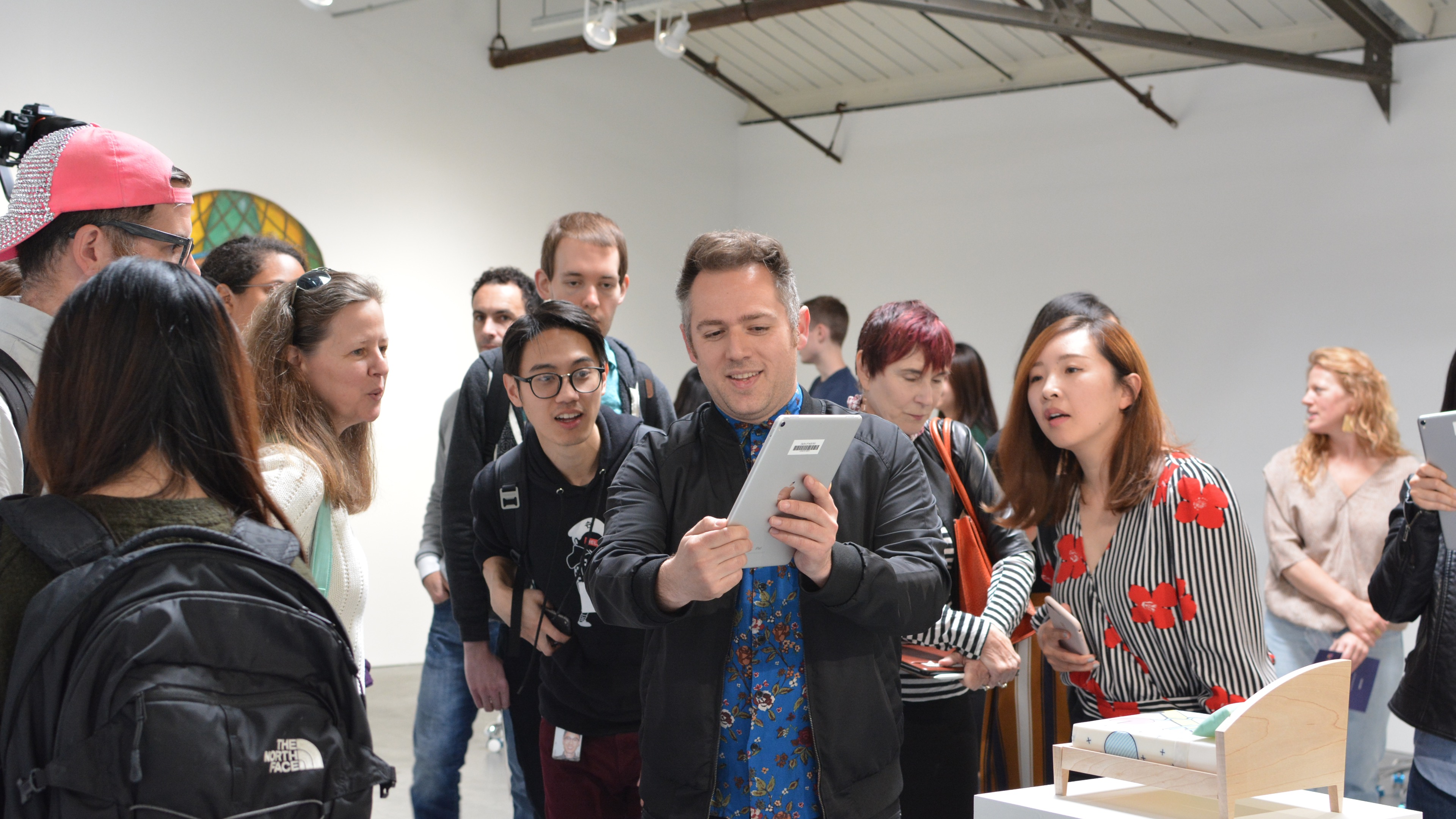 A lot of work has gone into making cloud syncing work seamlessly, but it’s a feature that users who work exclusively on an iPad won’t ever notice. Adobe doesn’t seem bothered by this. In fact, the company seems intent on making it possible for a user to do all of their creative work without ever touching a desktop.

Adobe’s upcoming Project Aero will enable Creative Cloud users to build augmented reality content using existing software and preview it on ARKit-supported iOS devices via a companion app. At Adobe MAX, the company showed a demo of a multi-layer PSD created in Photoshop on the desktop being exported to Project Aero, where the scene came alive in 3D. Head of AR and Adobe Senior Director Stefano Corazza told me that iPad Photoshop users will be able to export to Project Aero as well.

“Some of the [file export] processing now is done inside Photoshop, but we are moving that entirely to the cloud. This will happen in early 2019. We already have the tech, we just have to move it over and release another beta.” 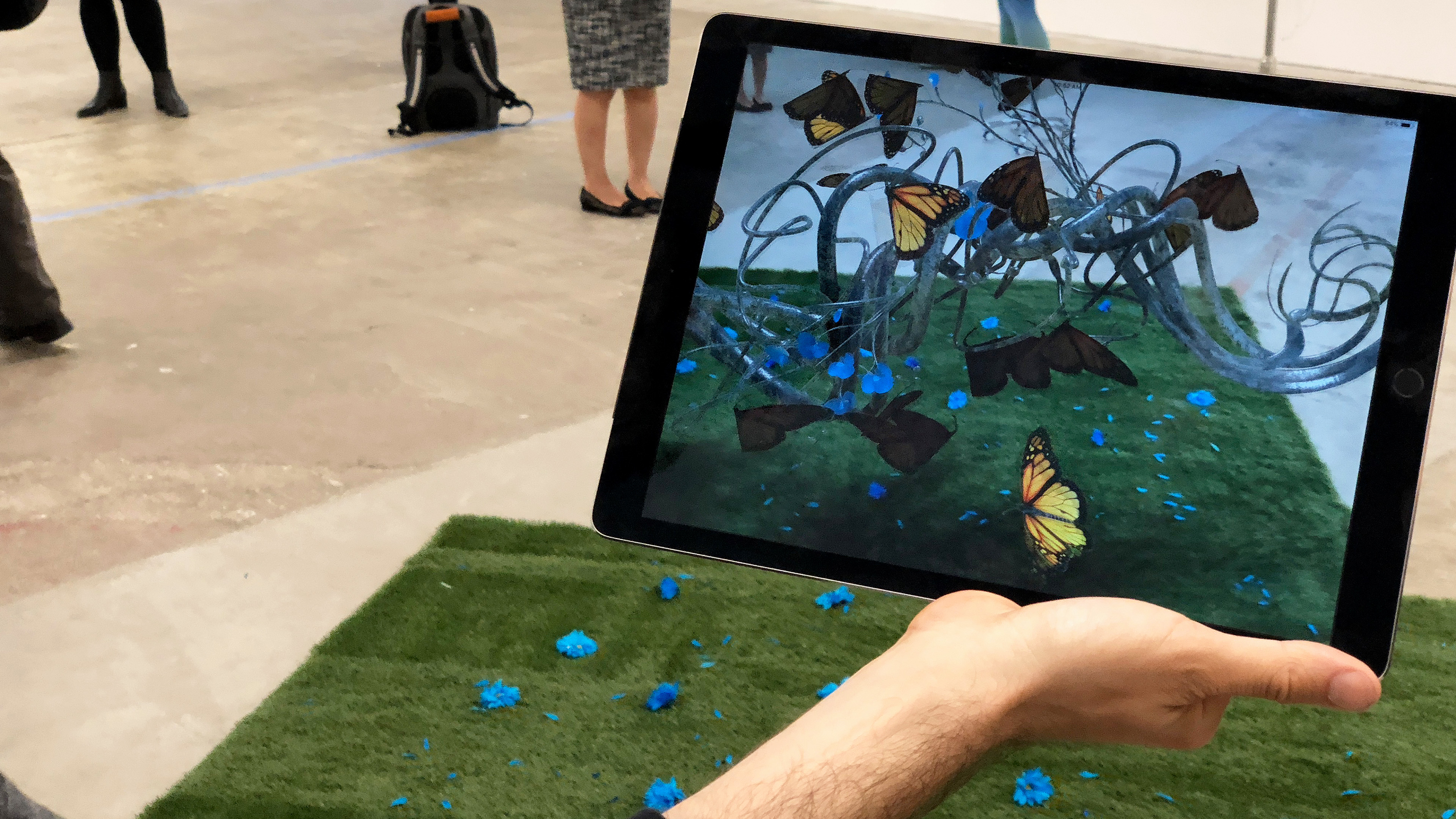 Support for exporting to Aero will make the iPad capable of authoring, exporting, and authentically previewing AR content with Adobe tools in one seamless workflow. That should be exciting for designers, as content can be iterated on more quickly than would be possible if moving across devices.

Although Photoshop is a familiar tool, it’s important to remember that we’re still at the beginning of something entirely new. Adobe is still figuring out which models of iPad will be supported, and the application’s pricing model has yet to be determined. No release date has been set.

It’s too early to call Photoshop for iPad a success or failure, because not even the app’s customers will truly know the best way to use it until they get it in their hands. While iOS users are busy sorting out the future, Lyell reminds me that Photoshop for Mac will still be there and ready to serve, just like it has for the last 28 years.

Project Catalyst is an Apple project that adds …