Up until recently, Thunderbolt 2 docks could mostly be described as “seen one, seen them all.” I’ve continued to like the idea of docks that fuse Thunderbolt 2, USB 3.0, and other peripherals together in a single Thunderbolt-to-Mac connection, but the docks I’ve seen from Belkin, Elgato, and Kanex are so similar in looks and features that they’d be hard to tell apart in a lineup. CalDigit’s dock looked very different from the rest, but functioned almost exactly the same. No Thunderbolt 2 dock has been small enough to consider “portable,” and CalDigit’s design is downright bag-defiant in shape.

That’s why it’s great to see Akitio take a different path with the $279 Thunder2 Dock (available through Amazon for $230), a Thunderbolt 2 dock with a smaller form factor and focus. Roughly as thin as a MacBook Pro and made from a nearly-matching aluminum, Thunder2 Dock manages to include seven high-speed data ports even though it’s roughly the size of a portable hard drive. Since it requires wall power, it’s not completely portable, and just like its rivals, you give up certain features to gain others. But it’s definitely the first Thunderbolt dock I’d carry around if I needed multi-device support in the field… 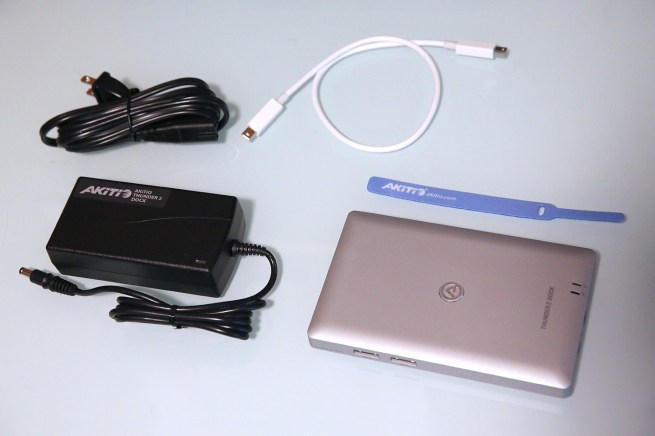 Akitio’s bundle of components is very similar to other Thunderbolt 2 docks I’ve covered. You get the silver Thunder2 Dock, a large black power supply, and a white Thunderbolt 2 cable — a 19″ part Akitio fairly calls a $29 value, since it’s not always included with Thunderbolt accessories. You also get a blue cable-managing tie, which like the power supply has surprisingly prominent Akitio branding. To that end, the company also includes 14 (yes, 14) additional Akitio stickers just in case you… well, I don’t know what you’d do with 14 Akitio logos, unless you have kids who love stickers. 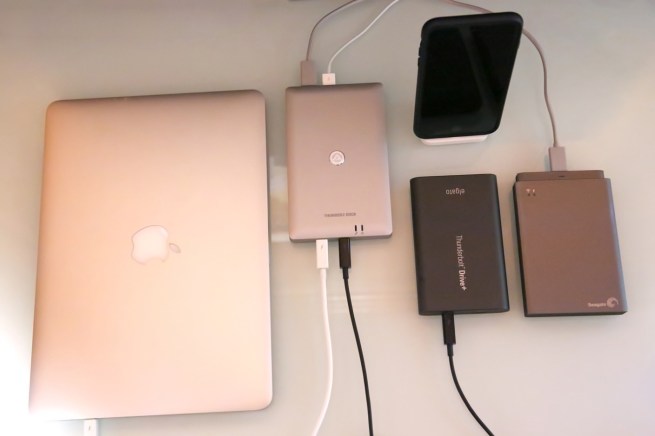 Thunder2 Dock’s biggest selling point is its small size. Measuring roughly 6.2″ by 3.8″ by 0.65″, it’s not much bigger than a typical portable hard drive enclosure, and very similar in footprint to an iPhone 6 Plus. Only one of its four edges lacks ports; another contains one power port, a FireWire 800 port, and two USB 3.0 ports; the next has two 6GB eSATA ports; and the last has two Thunderbolt 2 ports. Four black rubber feet on the bottom provide stabilization on a flat surface.

It’s worth pointing out what Akitio’s ports do and don’t offer relative to rival Thunderbolt 2 docks. Twin Thunderbolt 2 ports are a given on these accessories — you always need one to connect to your Mac, and the other to connect a Thunderbolt/Thunderbolt 2 accessory such as a hard drive or monitor. Ditto on the twin USB 3.0 ports, which each support high-speed UASP and 10W/2.1-Amp output for iPad charging, if you install a free OS X driver. The FireWire 800 port is a rarer feature, and the two eSATA ports are only a little more common. Akitio notes that the eSATA and USB ports are each capped at around 370MB/second transfer rates, and that’s about as high as I saw Thunder2 Dock-connected devices go during testing with Blackmagic Disk Speed Test. An Akitio-enclosed USB 3.0 hard drive tapped out at 127MB/s with or without going through Thunder2 Dock, and an Elgato Thunderbolt+ Drive SSD similarly saw basically the same 300-370MB/second write/read speeds regardless of whether it was directly Mac-connected or running through the dock. 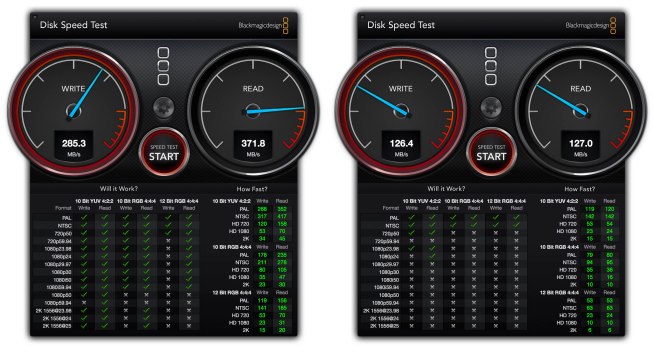 What’s missing: Akitio’s rivals all include one Ethernet port, one HDMI port, and at least one if not two 3.5mm audio ports, none of which are included in Thunder2 Dock. In other words, you’d be partially right to think of this as a data hub with USB 3.0, FireWire 800, Thunderbolt 2, and eSATA support, enabling devices — particularly hard drives and iOS devices — to make a single-point connection with Thunderbolt or Thunderbolt 2 Macs. While Akitio’s packaging touts support “for all your 4K workflow connections,” if one of those workflow connections depends on HDMI, you’ll need to directly connect the HDMI cable to your Mac, not Thunder2 Dock. But it does support Thunderbolt 2-connected 4K monitors, and daisy-chaining of up to 6 Thunderbolt 2 devices. 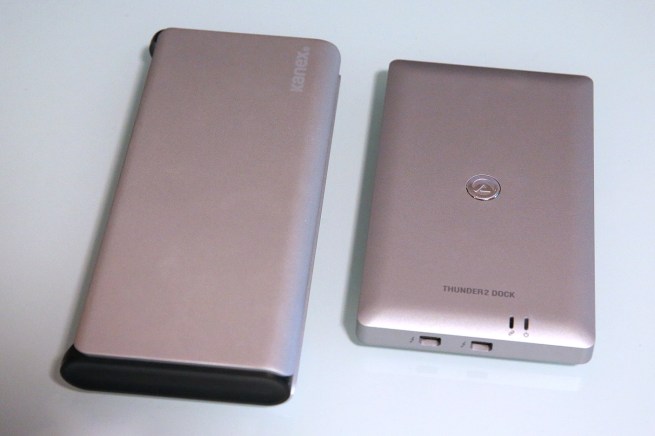 After testing each new Thunderbolt 2 dock, I step back and consider who the target market is likely to be for the model, and with the last four, the answers have been pretty similar: they’re all desktop-bound docks with the same “throw in the kitchen sink” set of features, differentiated primarily by a single port or a $50-$100 swing in price. Akitio’s Thunder2 Dock is a distinctive option both because of its thinner, bag-friendly form factor and its heavy focus on data transfers rather than A/V functionality. This isn’t necessarily the dock to pick if you want a one-cable connection to both an HDTV and your peripherals, but it’s a very streamlined and versatile way of connecting multiple USB, eSATA, FireWire 800 and Thunderbolt devices to a Mac all at once. At Amazon’s $230 street price, Thunder2 Dock is also on the lower end of the price spectrum for Thunderbolt 2 Docks, adding to its appeal. Give it particularly serious consideration if thinness and broad hard drive support are important to your Mac’s workflow.