Photos claim to show iPhone 5C logic board and structure 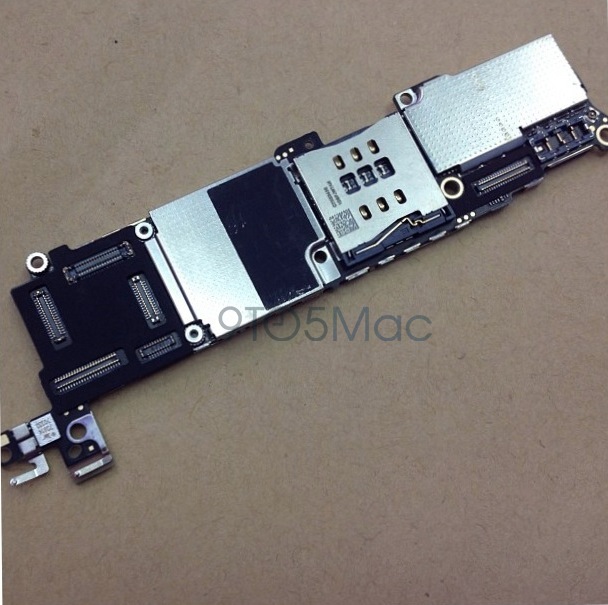 Chinese site CTechCN is showing photos of what they claim to be the logic board for the upcoming iPhone 5C. When compared with alleged photos of the iPhone 5S logic board, we can see slight design differences.

END_OF_DOCUMENT_TOKEN_TO_BE_REPLACED 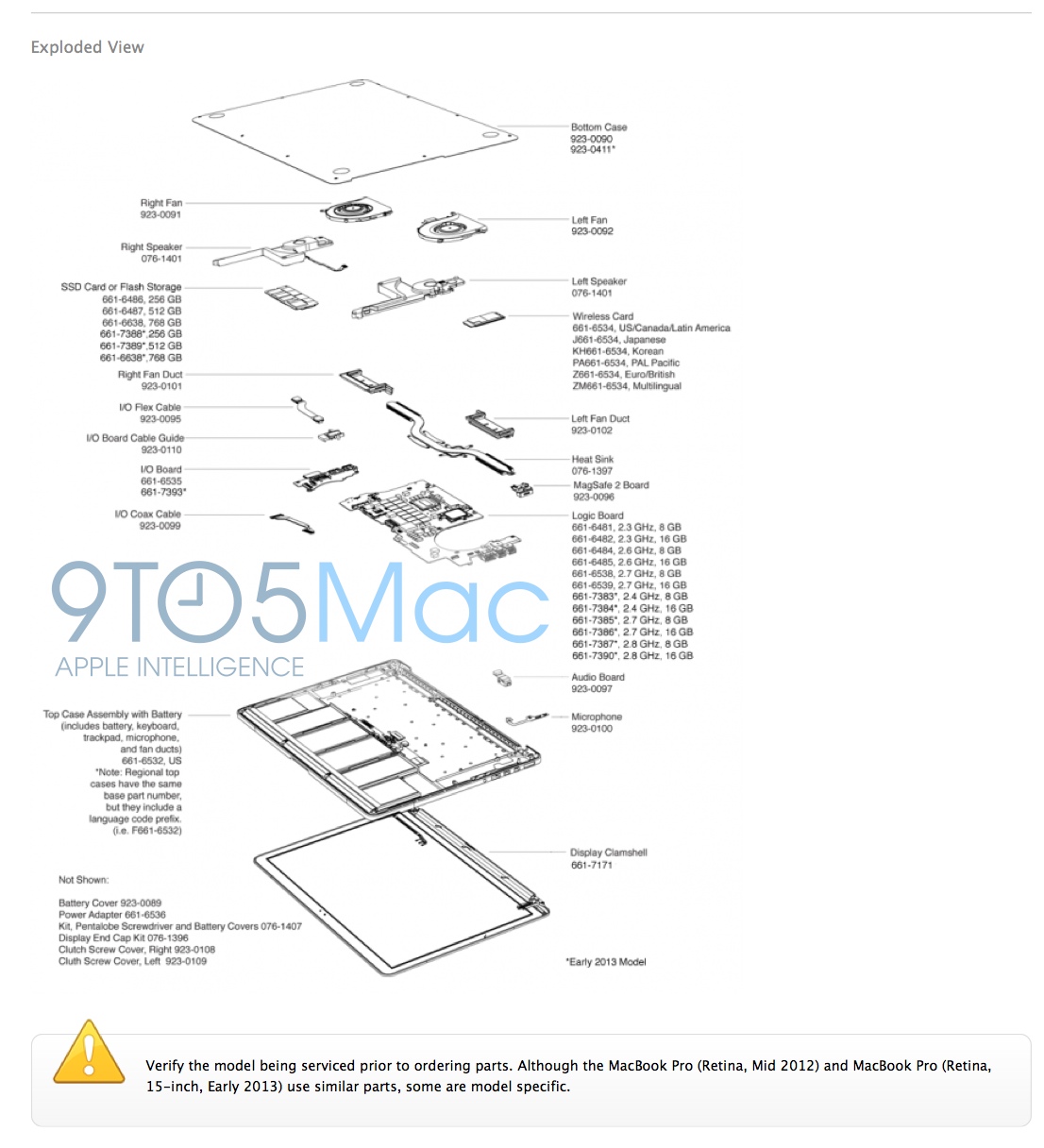 It appears the recent spec update to the MacBook Pros wasn’t as minor as we had originally thought. According to a leaked Apple repair guide for the 15-inch Retina MacBook Pro, many internals including the SSD, I/O Board, Logic Board and even the bottom case have been updated to new parts. While it isn’t clear yet how the updated parts were changed (besides the obvious CPU speed), it reminded us of a Foxconn leak we got in October 2012:

1. The rmbp in production line D2 is identified as defected products as in terms of thermal heating and screen ghosting. P/S: Apple is not going to re-launch the 15” rmbp. Just that Apple will improve on the production technique in D2 line. Apple will launch the 13” rmbp. Ghosting and thermal issues will be fixed but internals and design will be similar to 15” rmbp.

We also have the 2013 repair manual for the 13-inch MacBook Pro below that only shows 2013 updates to logic board (likely just for CPU updates) and how to tell which model of Retina MacBook Pro you have for both 13- and 15-inch varieties. END_OF_DOCUMENT_TOKEN_TO_BE_REPLACED 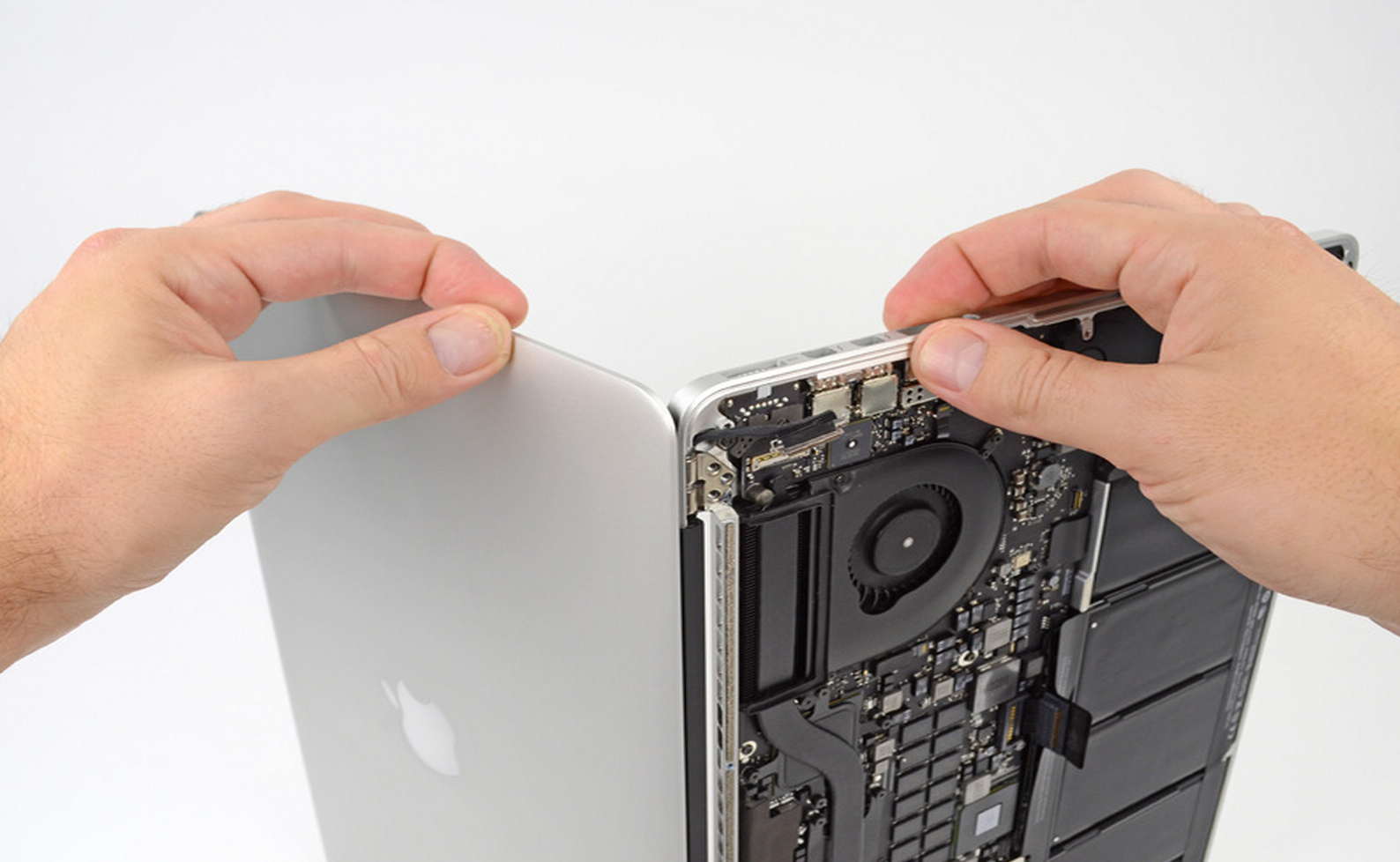 You might remember a couple months ago when our friends at iFixit tore down the new Retina MacBook Pro. Unfortunately, the device received its lowest repairability score with the company calling it “the least repairable laptop”. While the new MacBooks provide possibly Apple’s least accessible and upgradeable design out of the box, iFixit updated its website today with its official 2012 MacBook Pro Retina repair guide to make it as easy as possible. Fifteen separate installation guides for the AirPort Board, battery, fans, logic board, speakers, SSD, trackpad, etc., are included in the repair guide with one maintenance guide for reapplying thermal paste to the CPU and GPU.

Many components within the laptop can be removed without much fuss, provided folks use the correct tools. Pentalobe screws hold the lower case in place and Torx screws secure everything else. Spudgers and plastic opening tools are absolutely necessary, as many of the components are designed with such tight tolerances that using fingertips is simply not an option.

Fair warning: working on the laptop is no easy task. Some repairs are simply infeasible. For example, there is no way to replace the trackpad without removing the battery. And while it’s possible to remove the battery, chances are high that it will be punctured in the process. Puncturing Lithium-polymer batteries releases noxious fumes and can cause fires. Additionally, removing the LCD glass from the aluminum frame will almost certainly break the glass. So components residing under the LCD — such as the FaceTime camera — will have to be replaced with the entire assembly… Finding replacements for the machine’s proprietary components is currently difficult. We’re working to source parts, but it may take some time.

iFixit also estimated that third-party battery replacements —if done correctly— could cost over $500:

END_OF_DOCUMENT_TOKEN_TO_BE_REPLACED

Purported iPad 3 shells floating around China, here’s a very high-resolution image of the inside, and photos of the outside 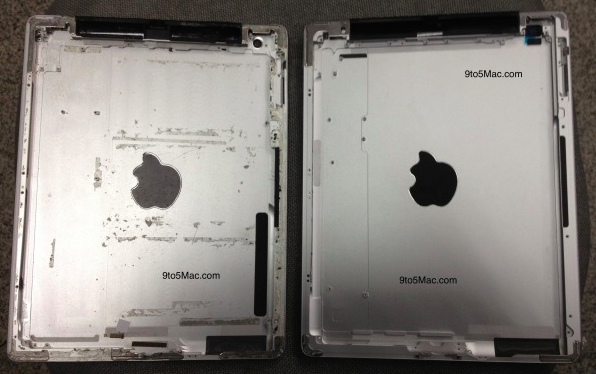 Since a purported iPad 3 back-shell image leaked earlier today, we have dug into the story to uncover where it originally came from and some of the intricate details behind the part. For one, there are not only a few of these back-shells floated to repair shops, but there are sizable amounts of these parts built-in China. This gives credence to reports about the iPad 3 is in production, and it likely means things are moving full steam ahead of the rumored-March launch.

Next, the original image comes from a Chinese supplier who provides parts to iPad repair shops across the globe.

Perhaps the best news of the night is that we have a very high-resolution version of the image. Click the image below to view the full super high-res version. The iPad 3 rumors include the device to have a Retina Display, faster processor, improved graphics, and better cameras. As hinted by these back-shells and earlier rumors, the iPad 3 will likely sport a design that closely mirrors the iPad 2 design.

Update: Our friends at Apple.pro also obtained photos of the iPad 3 back shell, and they have a photo of the outer back portion. It appears that the camera lens is larger than the iPad 2 camera lens, and they confirmed the iPad 3 would feature magnets to support the Smart Cover. You can catch that photo after the break as well.