Pressing on: How Apple evolved and eliminated the iPhone’s home button over a decade

When the original iPhone was unveiled in January 2007, Steve Jobs introduced its signature home button with a succinct pitch: “It takes you home from wherever you are. And that’s it.” Such a simple explanation seems striking today. Not only would the home button evolve into a Swiss Army Knife of functions, but it would become the iconic face of the iPhone itself, making it instantly recognizable even from a distance.

Ten years later, the home button has been put through its paces. It’s old, bloated with features, and taking up valuable space on devices with rapidly shrinking bezels. For the first time this fall, Apple will ship an iPhone without a home button at all — the iPhone X. How did we get here? Let’s take a look back at the home button’s winding history.

iPhone OS 1, the software that shipped on the original iPhone, was rudimentary by today’s standards. Features like multitasking, Siri, and fingerprint authentication wouldn’t arrive for years. Originally, the home button lived up to its name. Click once to go home or once to wake your phone up. For diagnostic purposes, you could reboot the phone by holding down the sleep/wake button and home button, or force quit an app by holding down the home button for a few seconds, but those features were hidden and not expected to be used.

The first sign of feature creep came innocently enough with iPhone OS 1.1.1. New was the option to double-click the home button to show music playback controls. The addition nearly coincided with the release of the first iPod touch, and seemed straightforward enough. After all, the iPhone itself was part iPod, right?

iPhone OS 2 brought screenshots to the iPhone for the first time, by pressing both the sleep/wake button and home button simultaneously. The same update introduced the App Store, and overnight, organizing your home screen became a concern. iPhone OS 2.2 extended the home button’s concept, with a click on any home screen to return to the first page of apps. 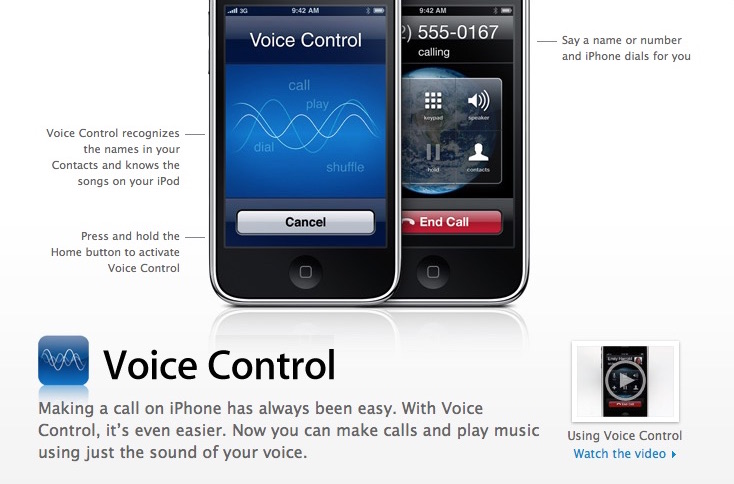 The iPhone 3GS brought a significantly more powerful CPU to the iPhone. iPhone OS 3 took full advantage of this power, most notably with Voice Control, an early predecessor of Siri. How did you invoke it? Just press and hold the home button, or the center button on Apple earbuds with a remote. The shortcut to force quit an app had to be remapped to make this change possible, adding the extra step of first holding the sleep/wake button before holding down home.

Spotlight, also new with iPhone OS 3, could be remapped to be accessed with a double-click. iPhone OS 3.1 added the option of invoking accessibility settings with a triple-click. 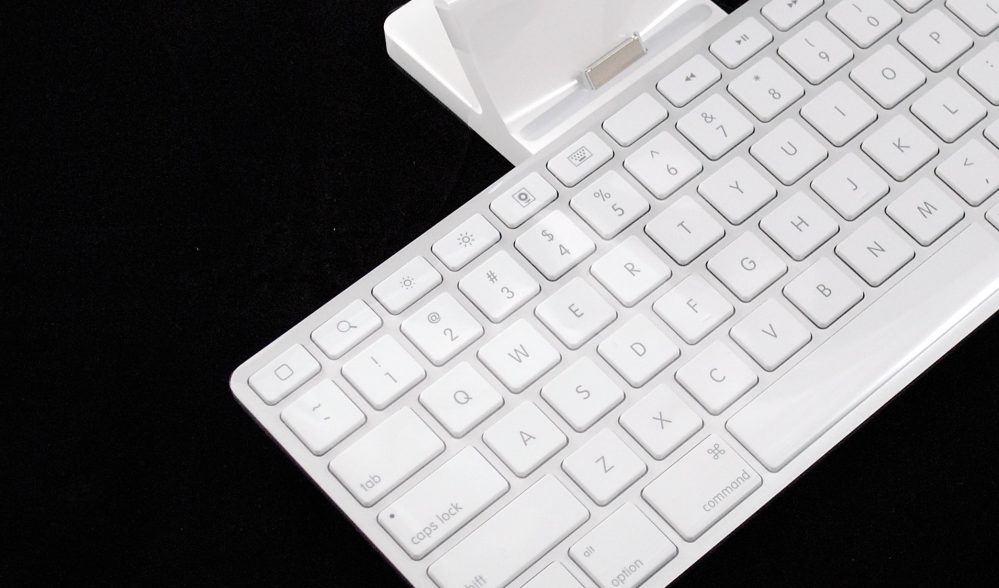 iPhone OS 3.2 brought with it the iPad. Eventually, the iPad would pioneer new interaction models in iOS, but it initially behaved much like the iPhone. One curious iPad accessory was the 30-pin keyboard dock. Designed to look like Apple’s Mac keyboards, the device had a specialized row of function keys for iPad-specific tasks. Instead of an escape key, a home button was present in the upper left-hand corner. 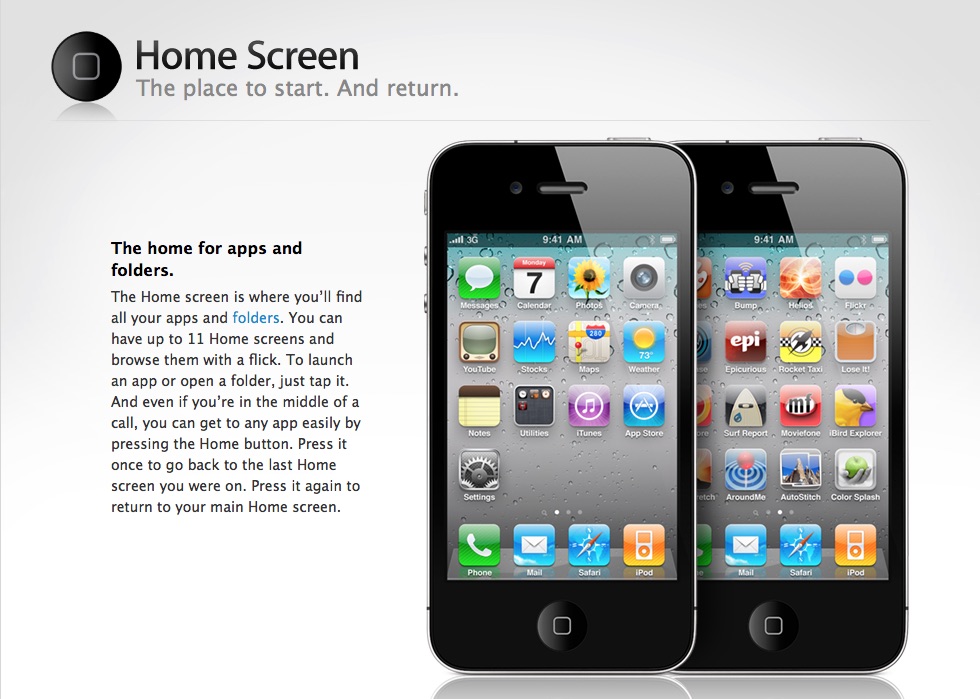 When the iPhone 4 launched, it felt perfectly natural to use the same button you’d use to go home as a button to switch apps. Double-clicking brought up a linen-lined application drawer from the bottom of the screen, and swiping over revealed music controls. This same space would later become populated on the iPad with various toggles and sliders for system functions.

The 6th generation iPod nano also debuted in 2010, and while it didn’t run iOS or have a home button itself, it provided the first hints of the future ahead. The tiny nano shed the old-fashioned click wheel and replaced it entirely with a sharper, but smaller touchscreen (sound familiar?) To exit apps, users could either press and hold the display or simply swipe the app away and offscreen to return home. Seven years later, Apple would employ a similar gesture to return home on the iPhone X. 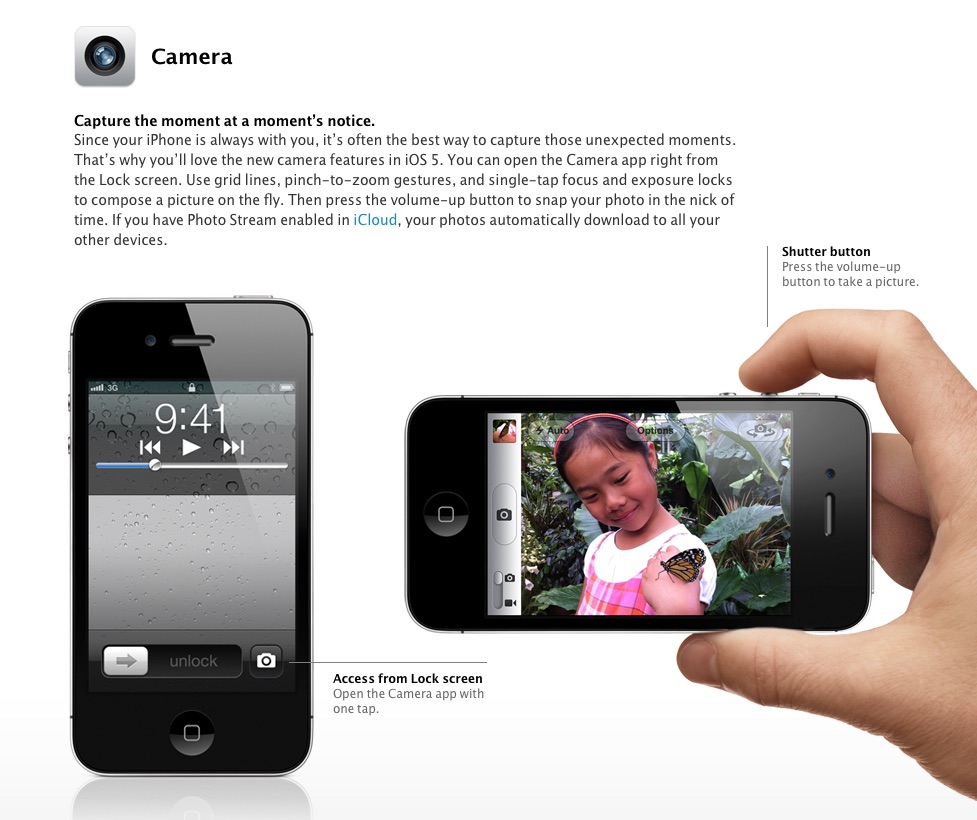 iOS 5 and Siri were released alongside the iPhone 4s, and Apple recycled the action to start Voice Control for its new virtual assistant. iOS 5 also introduced a short-lived solution to a now popular feature. Double-clicking on the lock screen revealed a camera icon which could be tapped for quick photo access. The action was removed in iOS 5.1 and replaced with a swiping gesture.

New for the iPad were a set of multitasking gestures that marked Apple’s first efforts to actively reduce dependence on the home button. First previewed in iOS 4.3, the multi-finger gestures allowed users to close apps, switch apps, and invoke the app switcher entirely in software.

This trend persisted with iOS 5 beta 3, when Assistive Touch was added. Assistive Touch was billed as an accessibility feature to provide an alternate way to control your phone, but many users were drawn to its ability to simulate a virtual home button onscreen. Home button failures have plagued the iPhone since the early days, and Assistive Touch was a welcome addition for those who experience the issue. In fact, in some Asian countries, the feature became popular as a preventative measure against the button’s failure.

Around this same time, Apple began bringing the concept of a home screen to other platforms. The launch of iCloud.com brought an iOS-style home screen to the web with an on-screen home button, and Macs started shipping with Launchpad, a grid of app icons accessible at any time by pressing a dedicated function key on the keyboard.

The final redesign of the iPod nano brought a fresh take on the home button, replacing the gesture-based interface of the previous generation with an iPhone-style home button. Mimicking the shape of the system icons, the button was adorned with a round glyph instead of a rounded rectangle.

The iPhone 5s introduced the most radical change to the home button ever: Touch ID. A fingerprint sensor for authentication was now embedded into the home button itself, outlined by a shiny metal ring. Purchases could be made with Touch ID, but were limited to Apple services like the App Store. In order to familiarize users with the new home button, Apple Store demo iPhones were outfitted with a custom Touch ID setup app.

CarPlay, announced in 2013 as iOS in the Car, brought an on-screen home button to car dashboards. 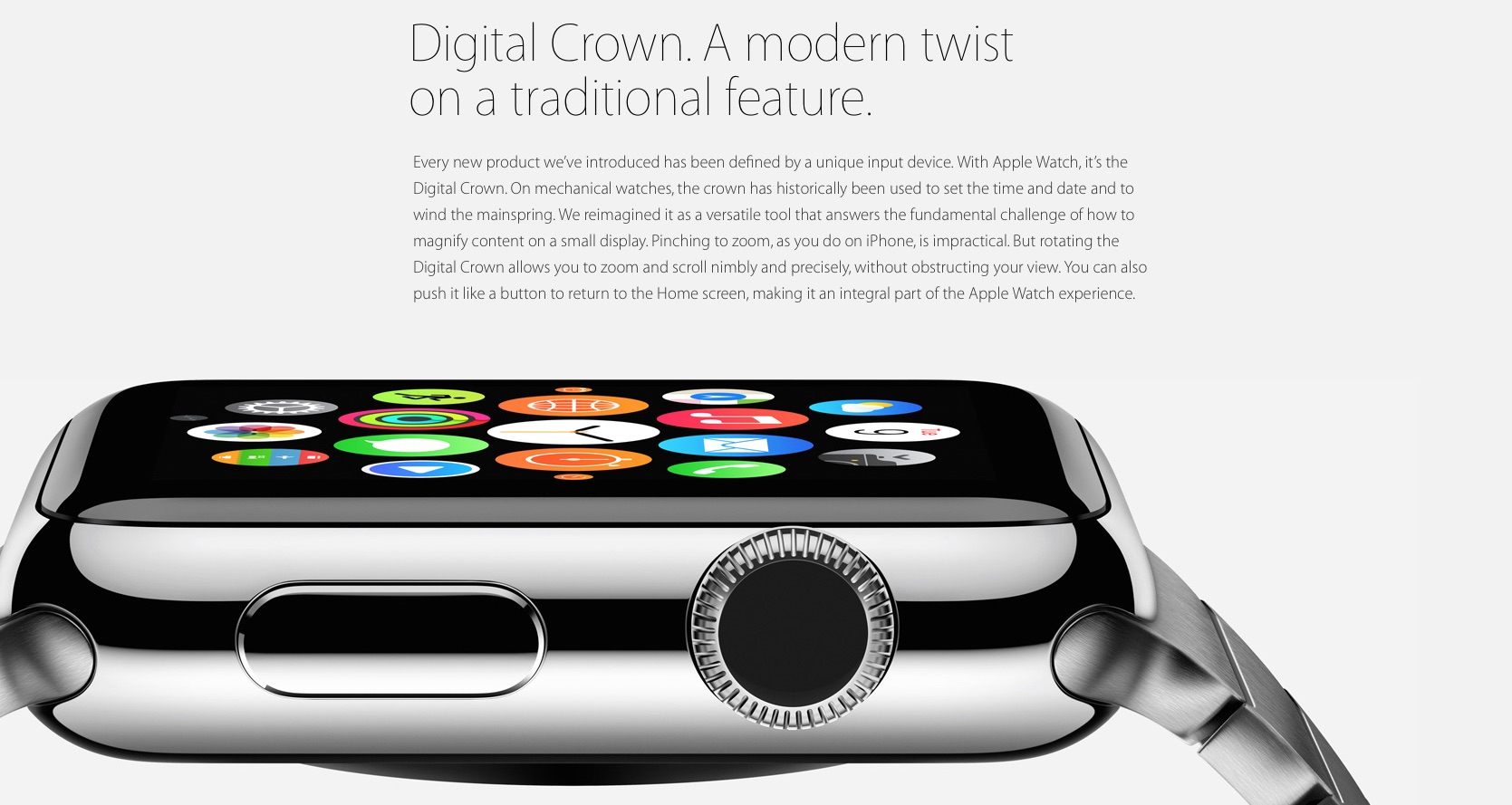 With iOS 8 and the iPhone 6, Apple entrenched the importance of Touch ID while simultaneously de-emphasizing the user’s reliance on the home button to control the iPhone. Apple Pay was launched, placing a new weight on the home button’s shoulders. With new and larger displays, the iPhone 6 and 6 Plus included a feature called Reachability, which slid down the iPhone’s entire interface to make onscreen items easier to reach. The feature introduced a new interaction: the double-tap. Distinctively different from a double-click, the button didn’t need to be pressed down to invoke the command. iOS 8 also introduced “Hey, Siri” activation, the ability to launch Siri with just your voice.

Apple’s newest product category announced in 2014 drew inspiration from the iPhone’s home button for its signature hardware feature. The Apple Watch included a multi-function dial called the Digital Crown, reminiscent of analog crowns on traditional watches, but also borrowing heavily from the iPhone. Just like the home button, one click exits the current app, pressing and holding activates Siri, and a double-click returns to the previous app, similar to multitasking. 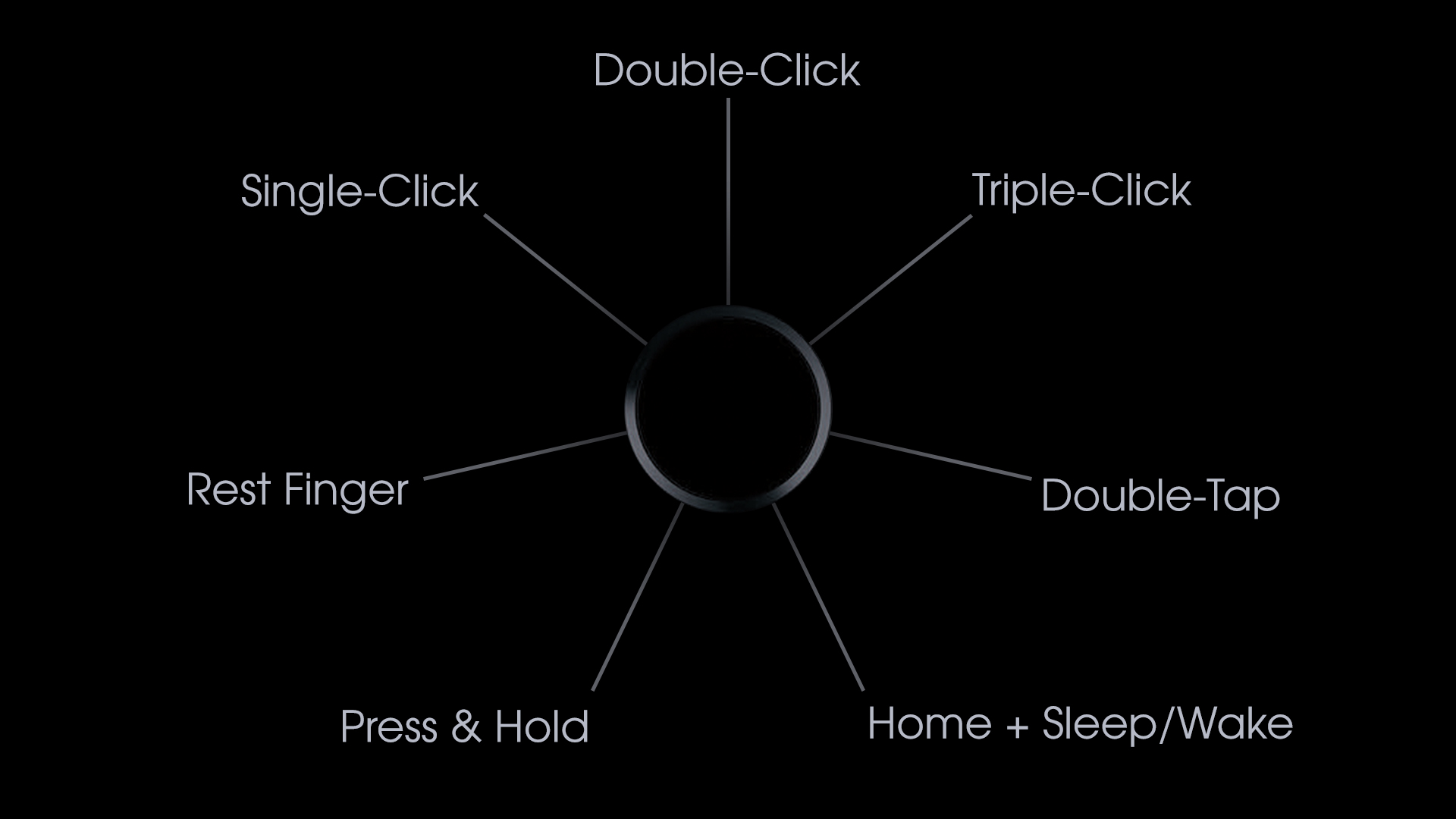 Apple Pay continued driving ahead in iOS 9, with a double-click gesture on the home screen to invoke the Wallet interface. In every other way, Apple began aggressively phasing out the home button. Plugging in headphones now automatically displayed music controls on the lock screen. 3D Touch was introduced with the iPhone 6s, and with it a new gesture to invoke multitasking by just pressing on the left edge of the display. This gesture was removed from iOS 11. Perhaps most significantly, a software “back” button found its way into the status bar of iOS 9, offering one-tap access to the last used app.

More powerful iPads brought slide over, where more than one app could be run onscreen at a time. This transformative feature greatly reduced the click burden required to constantly switch back and forth between two apps. 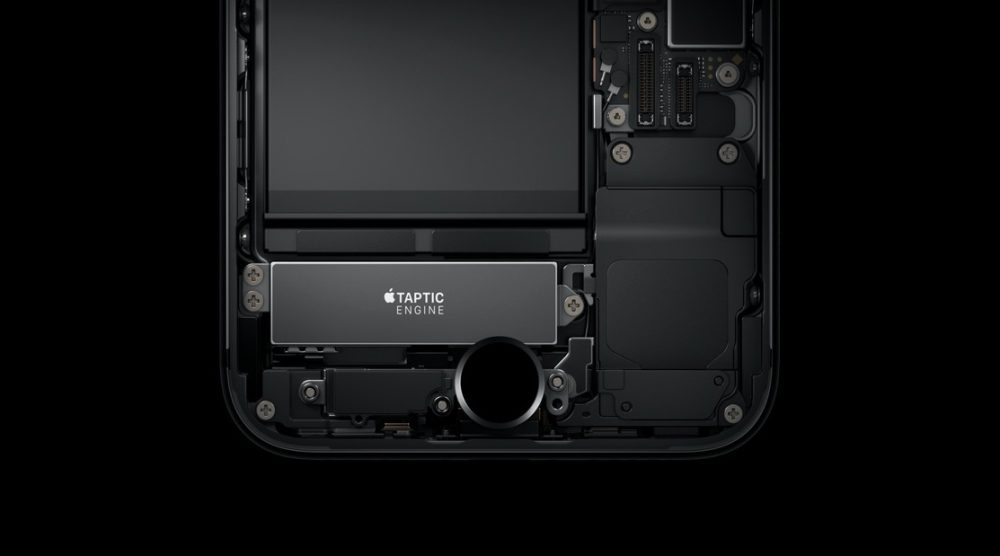 One could make the argument that the iPhone 7 was truly the first iPhone without a home button. While the front of the device didn’t look any different, the mechanical button was gone, replaced with a solid-state, pressure sensitive area. Thanks to the phone’s Taptic Engine, simulated clicking feedback was adjustable at any time.

The iPhone had long outgrown the tired home button, and by iOS 10 the writing was on the wall. The iPhone 7 was the first to offer raise to wake, a feature familiar to Apple Watch owners. In tandem, Apple employed the bloated button one last time with “press home to unlock” replacing the old “slide to unlock.”

Apple hasn’t been shy about the lack of home button on the iPhone X. An edge-to-edge display necessitated its removal, and years of muscle memory will need to be relearned. Apple’s marketing page for iPhone X specifically calls out the new gestures that replace the home button:

With iPhone X we’ve been shown the future of iOS, and the iPad will likely follow suit. It seems only a matter of time before every iOS device with a home button rides into the sunset. The iPod touch, the last member of the iPod line, hasn’t yet received even a first-generation Touch ID sensor.

In a few years when the home button is just a memory, one device is poised to carry on its legacy: the Apple Watch. The digital crown is ideal for scrolling content and interacting with such a small display, and if Apple intends to remove it, they have yet to lay the groundwork for a successor.